CREEPSHOW (1987) iT's the late eighties and you're five years old up late. You're watching cable television and this rolls across your screen on the cable-TV guide channel, "CreepShow 2". Do you watch it? Yes, you do. Creepshow is the sequel to the original film from the minds

iT’s the late eighties and you’re five years old up late. You’re watching cable television and this rolls across your screen on the cable-TV guide channel, “CreepShow 2”. Do you watch it?

Creepshow is the sequel to the original film from the minds of Stephen King and George Romero – obviously. Directed this time by Michael Gornick the cinematographer from the original anthology. Creepshow 2 although shorter than its predecessor is still based on stories from Stephen King and produced and written by George Romero. Still inspired by the Horror comic books of the fifties from such publishers as the legendary EC COMICS brand and in my opinion is the scarier of the two. There isn’t much dark humor found here. The emphasis leans more toward unsettling body horror and straight forward horror based on genuine mood, violence and atmosphere. 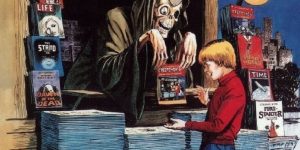 The progression of the film is narrated by the Creep blending both live action and animation in its prologue, interlude and epilogue. The body of the fill consists of three tales: Old Chief Wood’nhead, The Raft and The Hitchhiker. All very good stories, but the final tale is the creepiest one of them all. I still get weird chills every time i see the degradation of the Hitchhiker; completely uncomfortable macabre shit.

There was supposed to be five stories instead of three and although the Black Cat would’ve really made this movie better, I’m happy it didn’t make the cut and instead was included in the Tales from the Darkside movie in 1990. 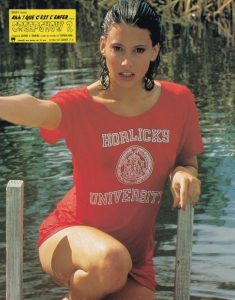 Stay Cool, Stay dry, Stay off the roads and keep your fingers on that REWIND button.