Justice, fantasy, the perfect love for the perfect cop; such are the qualities that shape the vision and sounds of Johann Derime’s Synthtastic sound. The producer from Marseille has left his imprint on the retro music scene as a household artist in the Synthwave genre 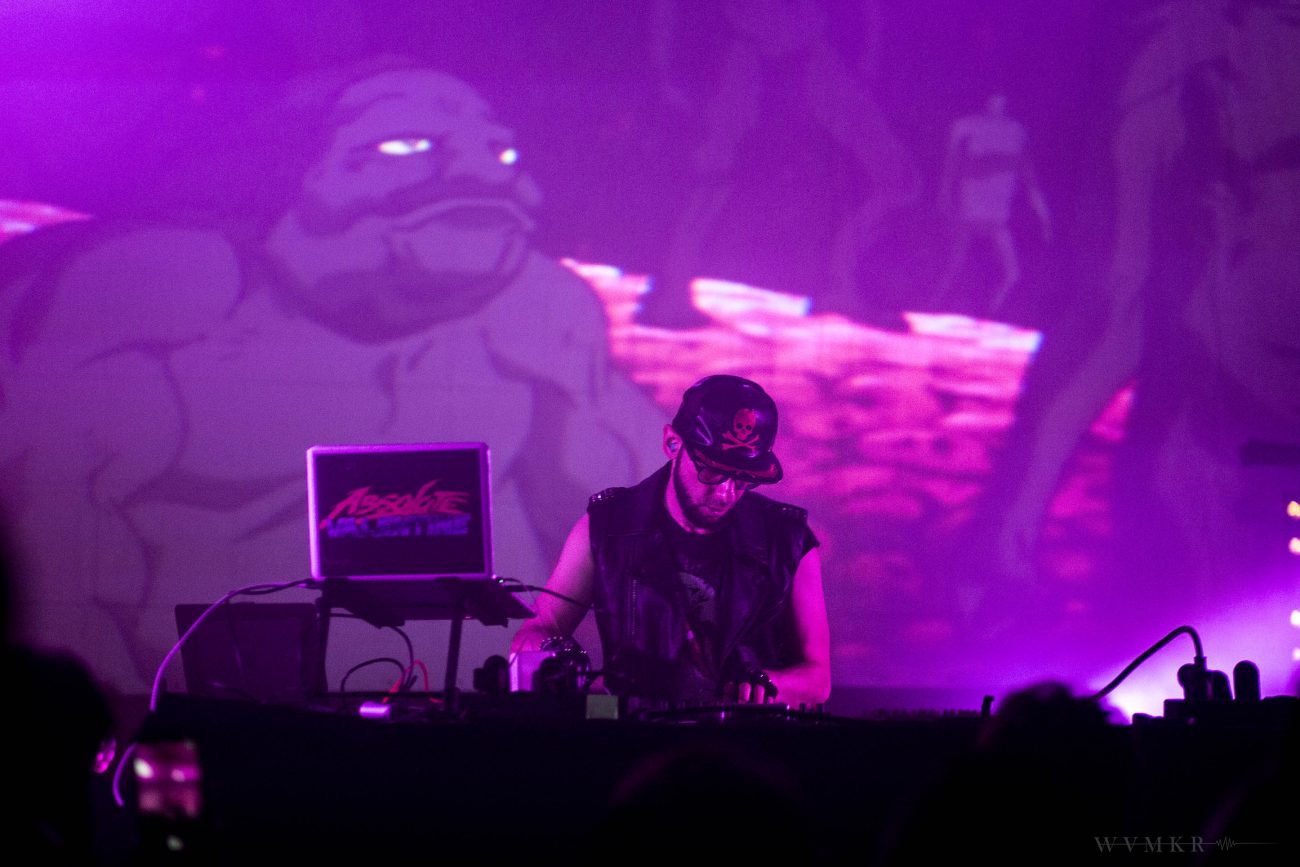 Justice, fantasy, the perfect love for the perfect cop; such are the qualities that shape the vision and sounds of Johann Derime’s Synthtastic sound. The producer from Marseille has left his imprint on the retro music scene as a household artist in the Synthwave genre as Absolute Valentine and a key player on the culture as a whole, as the founder of both Lazerdiscs Records and Drive Radio. As he kicks off his first few shows of 2019, Johann is getting ready for a busy, eventful year, starting with the imminent release of Omega, his upcoming full-length release. We caught up with the man on the day of his show with Neoslave and Mlada Fronta in Paris to bring you some news from RetroWave’s beloved Synthwave heartthrob. 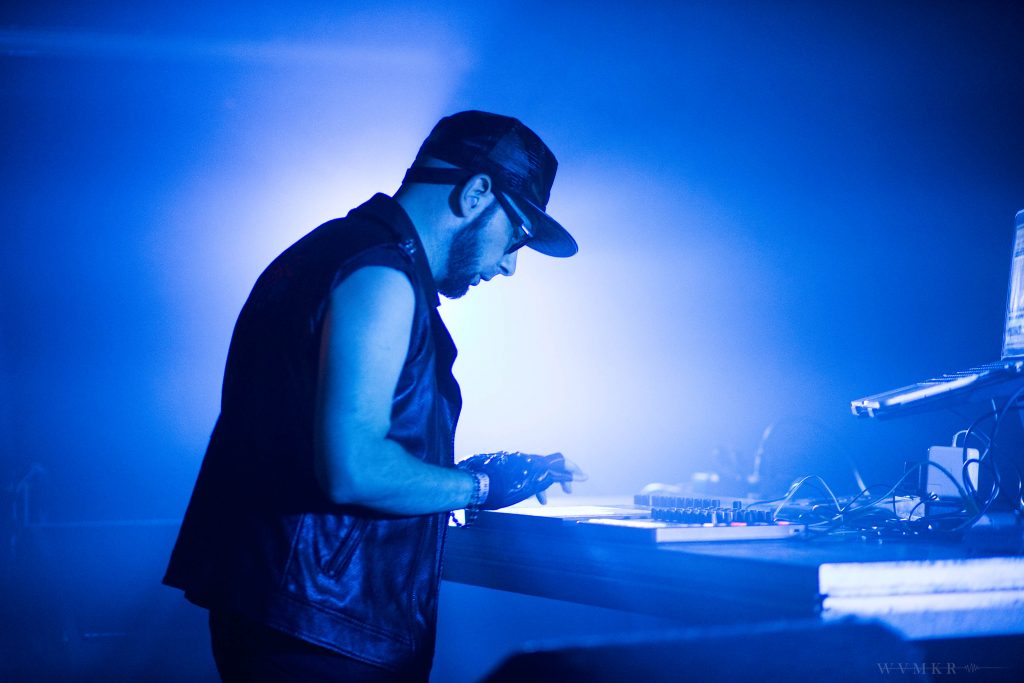 You recently What’s the first thing that struck you whilst travelling around and discovering the North American scene whilst on tour?
North Americans are even more passionate than we are. Up until now, I thought that this was our thing. They also see things from the opposite perspective. They see France as being at the forefront of it all. It’s quite interesting, really, because it’s not necessarily a specifically French thing but rather, more generally, a European movement. We’ve got the Swedes, the Dutch… North Americans also seem to have a thing for large-scale events too. My first gig over there was at the Neon RetroFest, which was a huge festival! It was like a Synthwave convention, with a bunch of rooms everywhere, gaming consoles, stands, role-playing, conferences… It was amazing! 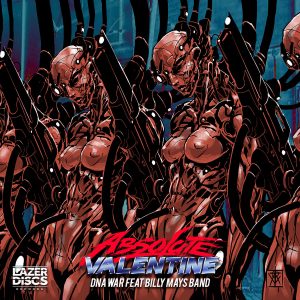 In February you released your latest single ‘DNA War’. Given that you’ve stated that the song will not be on your upcoming record Omega, how does it tie into your musical chronology?
‘DNA War’ is actually the prologue to the new album. ‘DNA War’ is Absolute Valentine’s arch nemesis. He genetically mutates people to turn them into perfect emotionless soldiers. The new record is going to be an adventure story revolving around Absolute Valentine against DNA War.

Is it a sequel to your previous album, Police Heartbreaker?
Absolutely, it’s a direct follow-up, only for this record I wanted to inject a little more maturity and more elements from various electronic music genres that I enjoy. It won’t be 100% Synthwave like some of my previous releases. It’s a very diverse record. It’s got some darker cuts and some more rhythmic songs.

Was there a change in your gear or workflow for this particular record?
I used pretty much the same tools as usual but my workflow was definitely different. I’ve had a lot of different experiences last year, which caused things to go a little more slowly. I really wanted to transcribe all these feelings I’ve had this past year.

How long did the writing process last, then?
It took about a year and a half. I usually take a year between each record but this time around I really wanted to focus on further developing my sound. I wanted to create something a little more mature and less “cliché” as far as Synthwave goes. I wanted to use my entire musical palette rather than restrict myself to one or two types of sound. 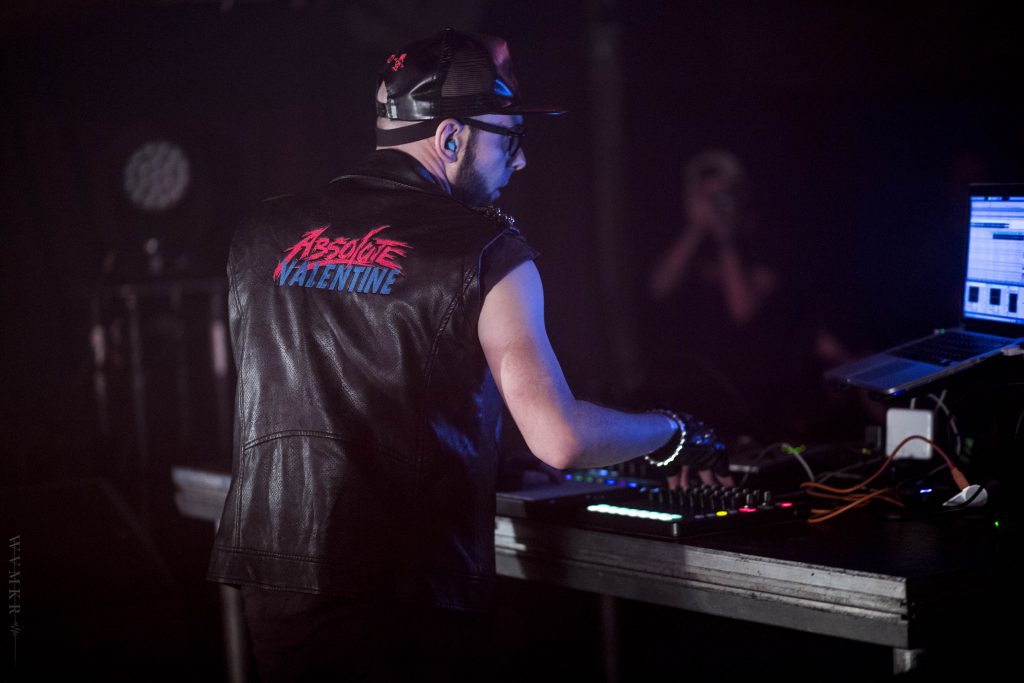 DNA War marks a return to a darker side of your sound. Would it be fair to relate this taste for dark, heavy tracks back to your youth in Black Metal bands?
Metal was basically a step in my musical journey. I started out playing classical music on Piano at Marseille’s conservatory, and since it was a very ‘rigid’ musical framework and I needed something a little more expressive and ‘Rock n’ Roll’, I started learning learning bass and guitar on my own. I started a few Black Metal bands and I was a really passionate metalhead at the time. I don’t listen to as much of it anymore though, so it doesn’t really have an influence on what I do. With that being said, I have a love for distortion, regardless of music genres. It’s true that metal has a lot of distortion but there also electronic music genres that utilize it as well. I love big low-ends, thumping kicks and all of that jazz. I discovered this through bands like In Flames, Hypocrisy, At the Gates and other bands who have a very aggressive sound. The new record also has a bit more distortion than on Police Heartbreaker.

Moving into Synthwave has allowed you to work autonomously as well. Was this a necessity for you?
It’s true that I was in need for some autonomy, specifically because of my metal bands. I wanted to be a little more free and do whatever I wanted. With that being said, I’ve now been working alone for the past ten or fifteen years and I feel the need to work more closely with other people. However, I really need to work with collaborators I’m excited to work with and with whom I share a strong friendship or bond with. I only work with people I’ve known for a while.

Speaking of your musical affinities and relating this back to Lazerdiscs Records: how do you determine which artist to sign?
There’s are a few criteria Darren and I look for, actually. Firstly, and obviously there’s the music. It needs to be mature enough, but the artist also needs to have a holistic vision that goes beyond the music. He needs to a few visual ideas, even if it’s just a logo. To us, it shows that the artist has taken the time to think about what they want to do and share through their music. It’s always a plus if the music is well mixed and mastered, but it’s not a make-or-break factor. Another criterion, which is even more important that the first, is the human aspect. We can turn down people because I feel like they’re not willing to invest themselves in a collaborative project. It’s important to know that when you’re working with a label or with other people, you need to learn how to listen, discuss and adapt. You’re working with people so you necessarily need to have a good sense of rapport in order to progress.

With regards to fans, We’re still dedicated to picking out lesser-known artists to help them break-out. We want to keep doing this, even if we also focus on bigger household names like Stilz and Robert Parker. Neoslave, who’s playing tonight, is a good example of this. He wasn’t well known but he sent us his demo and we started working with him and helped him evolve. Patience on our end is a very important factor as well. When you’re an artist I think it’s also important to disregard certain considerations, such as whether what you’re doing is going to blow up or whether what you’re doing is going to get you hits or views. I don’t think people care about that. What counts is the emotion people get out of it.

We’re reaching the end of the interview. Would you like to share any closing words?
Thank you for coming! And thank you to NewRetrowave for the support! Shoutout to Ten, as well! And congratulations on soon reaching one million subscribers on Youtube!

Finishing up: name, one of your favorite albums, movies and books?
Film-wise, I’m going to pick to classics: Robocop and The Crow.
Lately I’ve been listening a lot to the new Prequell. I really like the mix of electronic and symphonic sounds.
Book-wise, I’ll go for 1984 by Orwell.