If, like me, your childhood was in the 80s, it would be almost impossible to ignore how much of an influence road movies and action flicks had on riders, drivers and manufacturers to create some wild designs that have become icons of our time. My main 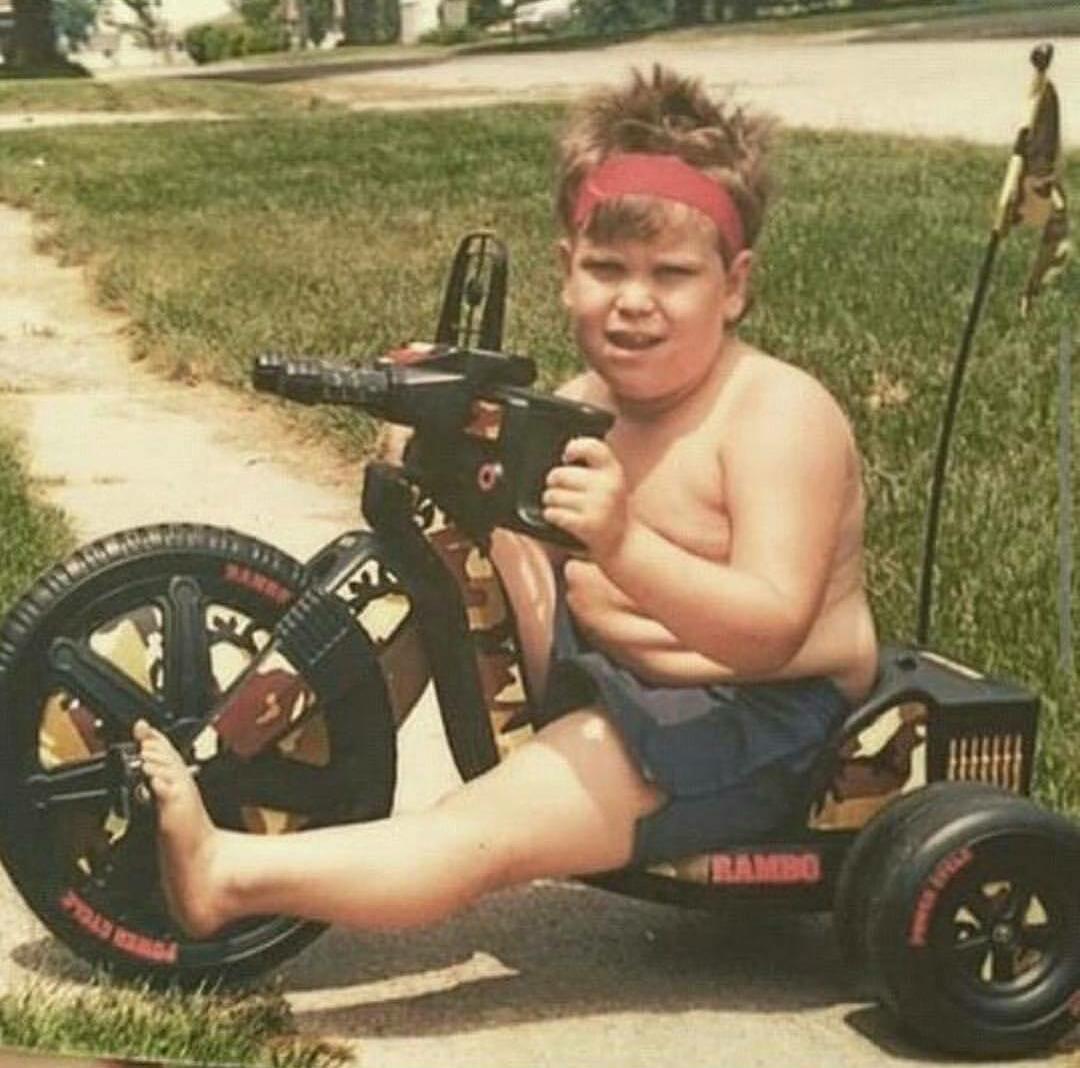 If, like me, your childhood was in the 80s, it would be almost impossible to ignore how much of an influence road movies and action flicks had on riders, drivers and manufacturers to create some wild designs that have become icons of our time.

My main inspirations for obtaining a licence to ride a motorcycle wasn’t to join a gang, or to race, or to grow a beard, get fat and become fearful of the rain like a Harley Davidson rider; but it was of course, Street Hawk.

Jesse Mach, ex motorcycle cop, now lone wolf working for the government fighting crime in a bustling city, dealing with crooks, robbers and thieves. Jesse was given free reign to deal with wrong doers on a military grade motorcycle which fired lasers and rockets, and could reach 300mph with “Hyperthrust”. At the time I didn’t care that a road bike was achieving speeds of a WW2 fighter plane around Los Angeles, I was more enamoured by Jessie and his exploits. A mysterious man philandering around L.A whose day job it was to protect the innocent, with a licence to kill. Street Hawk was a short lived television series that aired back in 1985 on ABC. It lasted only one season and there were only thirteen episodes ever made. And as with anything this cool and short lived, it gained a bit of a cult following.

He didn’t have a second helmet

Inspired by the enigmatic presence of man and machine dressed all in black, I did include some of that when customising one of my first motorcycles, the Suzuki TS125X. The Suzuki TS was released in Japan in 1970, with a simple and comfortable ride for multipurpose use. It was 2 stroke with a 6 speed gearbox and long fork travel. You could pretty much go anywhere on this little machine and have fun doing it.

A similar bike to the TS was the Yamaha XT ridden by John Rambo in First Blood. 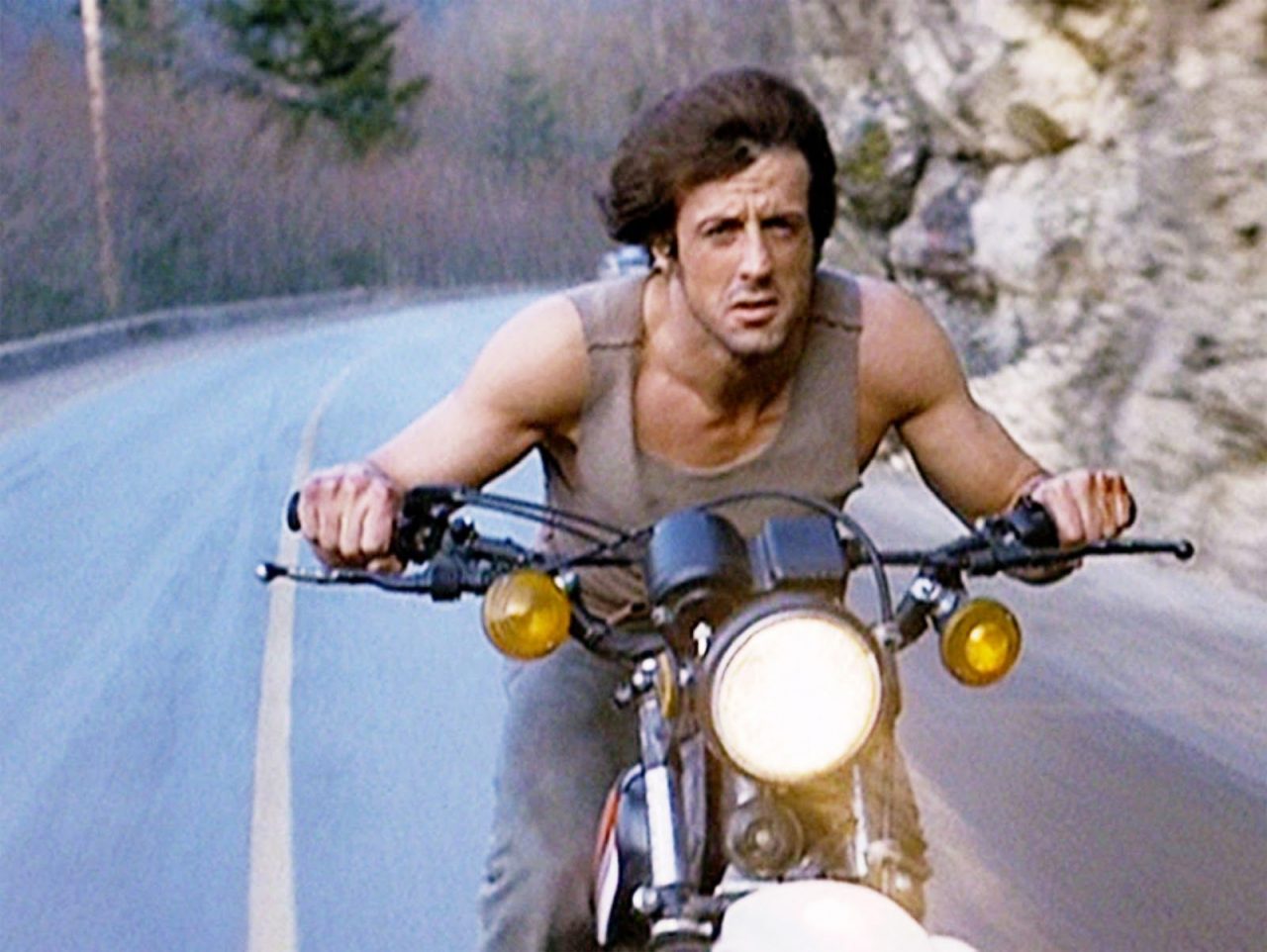 Reliable and good looking, in the 80s the TS was given rad decals and a bright paint scheme. The classic look round headlight was replaced with a square fairing and lamp, emulating that futuristic Street Hawk look even more. My bike was in bright Suzuki yellow with retro decals, but my aim was to achieve more of a “murdered out” look. As it was my first attempt at anything like this, it ended up a bit more “Mad Max” than the high gloss finish of Jessie Mach and his black beauty. 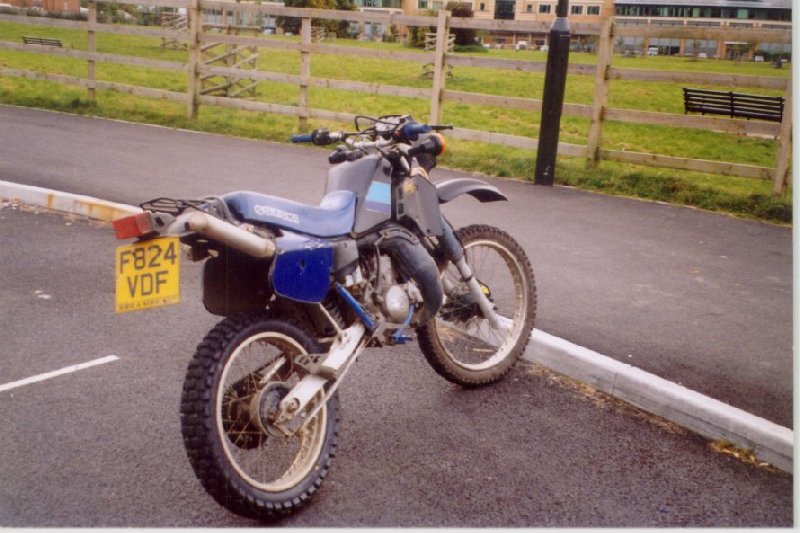 From the same team who built the cars of Bladerunner and The Last Starfighter, the Street Hawk was designed by non other than Andrew Probert who had touched many 80s franchises. FRom M.A.S.K to Airwolf and TRON.

Hondas XL500 and XR500 were used as the base frame and many modified parts were introduced over the series timeline, from the practical to the purely aesthetic. Here are the specs;

My TS125 was a little less dynamic, no lasers or Hyperthrust, but I had, on more than one occasion, switched off the headlights and ducked into a driveway or side street to avoid the cops (Stealth mode), and if you drafted behind a truck you could perhaps pretend to “boost” around it. 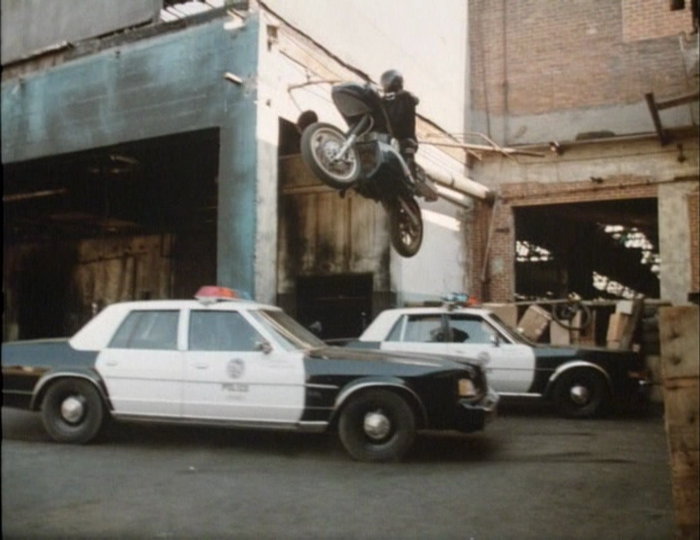 Dirt bikes were mad popular back in the 80’s, the lethal 2 stroke power of the raspy, smokey on/off road machines gave them a rebellious streak all of their own. I used to stick on The Dirt Bike Kid back in the day, which, if you haven’t seen it, is a lot of fun. The premise is fairly simple to follow, providing you’re a complete lunatic or a child.

Jack Simmons, a small town geeky kid from a single parent family, spends his mother’s last fifty bucks purchasing a self aware dirt cross bike (A Yamaha YZ-80). Infuriated by his whimsical purchase, she sells the bike to a local shop owner but the bike returns to Jack signalling the start of a “friendship” between boy and machine. 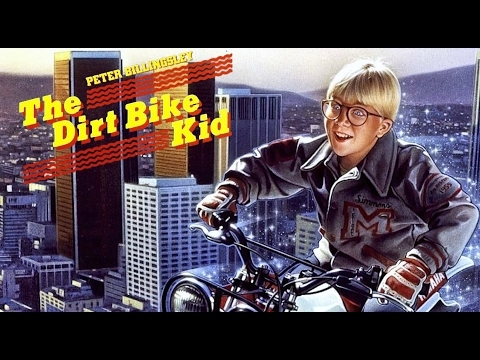 Jack gets involved in a financial battle between a bank and a hot dog business, ran by a family friend. After hacking the bank with his best friend Bo, they attempt to stop the demolition of said hot dog business by disrupting the bulldozing with a pie fight, enlisting the help of his little league team. I won’t spoil the ending but in a nutshell the kid and the dirt bike win and the hot dogs are ok. A dirt bike was now a childhood dream, yet the YZ-80 was not a street legal machine here in the UK, unless you modified it.

In the early nineties a young man and a robot father figure ran from another man with knives for arms in Terminator 2. Although quite obviously Arnie was a thorough badass in the film, I couldn’t help but admire the rebel without a cause, John Conner, on his stripped down Honda XR complete with a ginger carrying a ghetto blaster. The Terminator 2 bike chase is to bikers what Bullitt is to car lovers and if you have no clue what either of these things are, get in the sea.

The Honda XR however, didn’t sound like it would have in real life, the bike was dubbed with the 2 stroke engine to perhaps further accentuate the dichotomy between the brutal black truck on Johns tail and Arnie on the thundering Harley Davidson. Legally I could only ride small capacity machines until I was 21. So dirt bikes were my preferred mode of transport until that time came.

He may have needed a step stool to hop onto the Kawasaki GPZ900 R in Top Gun but Tom Cruise undeniably looked rad in his flight jacket and aviators riding the iconic Japanese sports bike around an military air base. Whether you’re drag racing a fighter jet or running from an angry blonde in a Porsche, a sports bike is what you need. Like the Street Hawk bike, although this wasn’t a custom dirt bike, it actually looked similar in ways to the futuristic crime fighting machine. The GPZ also known as the Ninja 900, came in a range of quintessential retro colour schemes. 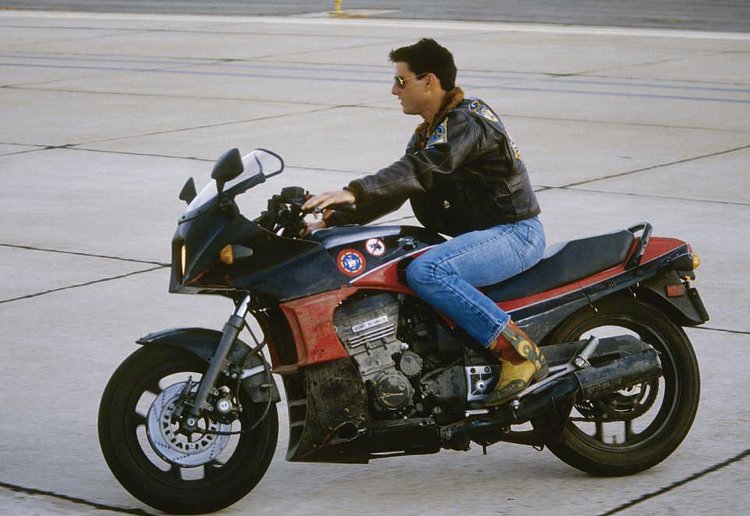 Some of the 80’s flagship models from Japan are often now referred to as “Jap Muscle”. Large litre bikes were relatively compact, fast, good looking machines with the edition of plastic fairings which certainly made the naked british bikes look ancient. Fairings were the future! 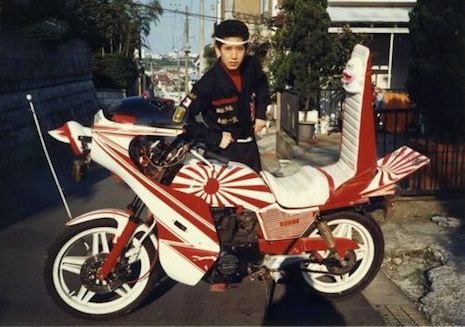 Talking about fairings, perhaps one of the most badass retro bike movies was Mad Max. Jim Rains or “Goose” rode a 1977 Kawasaki KZ1000, not a bike for faint hearted, a beast of a bike at a little over 240kg yet the strong 1000cc inline four cylinder engine could take you to 130mph. Because of its stability, power and adaptability the KZ was in fact used for many years as a police bike. Notably the KZ1000P was ridden by the T1000 in Terminator 2 in full police fairings. 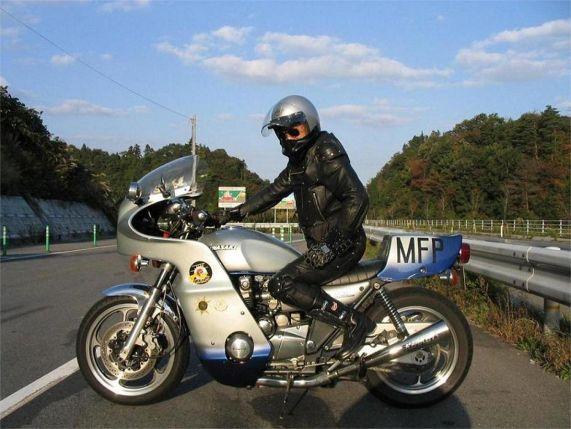 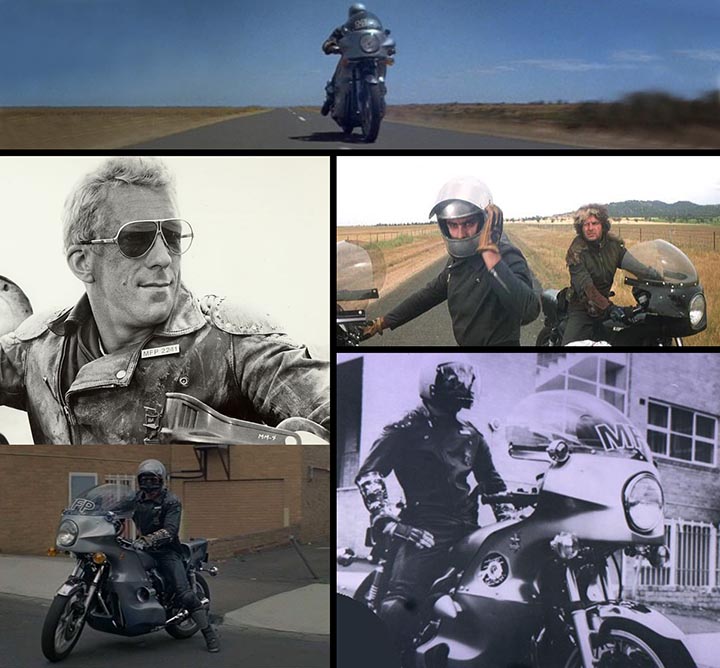 So that’s a brief history of some of my inspirations for riding motorcycles, it would be good to hear your stories of what got you into biking and what do you ride? For those who don’t ride, maybe make it a news years resolution to saddle up, stick a lid on and go have an adventure.