Moonraccoon’s 2017 debut Sunset City saw the Swedish producer craft 10 pulsing and infectious songs, many of which featuring collaborators like emotional crooner Thunder Porpoise or the synth shredder Straplocked. While those collaborative tracks were fantastic, it was on album midpoint “Midnight Cruise” that Moonraccoon

Moonraccoon’s 2017 debut Sunset City saw the Swedish producer craft 10 pulsing and infectious songs, many of which featuring collaborators like emotional crooner Thunder Porpoise or the synth shredder Straplocked. While those collaborative tracks were fantastic, it was on album midpoint “Midnight Cruise” that Moonraccoon showed what her particular brand of synthwave could bring to the table. That track’s spirit of melding the strange and unconventional with a strong sense of melody and emotion is what carried over most to her latest release — Future Forces. On this sophomore album, Moonraccoon drops 12 tracks that at times vary widely from one another but are unified in a cohesive and fully realized atmosphere that the album creates. 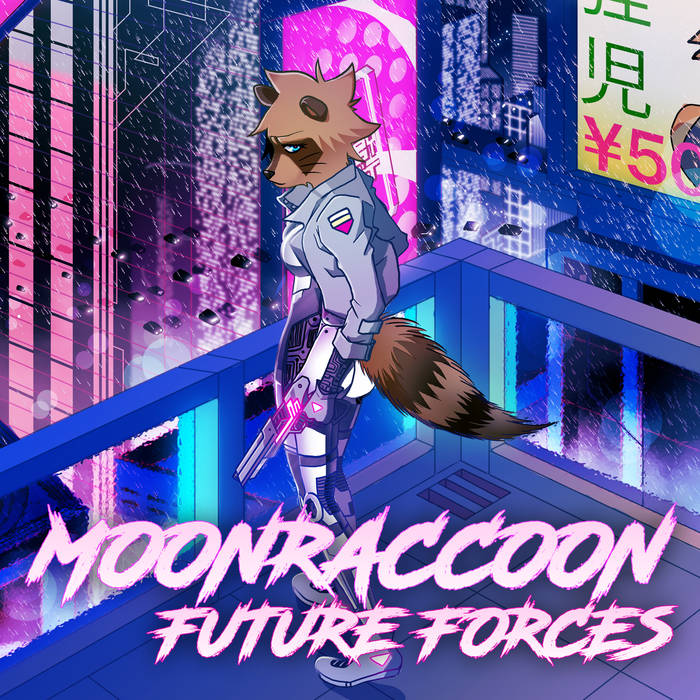 Opening track “The Future” opts for a slower and more cinematic opening, but the way it plays with filters on both synths and strange percussive sounds makes the song interesting, and by the time faster synths and guitars are introduced, the tension it builds is at a high point. The next track, “Target is a Machine” is an album high point with it’s buzzsaw of robotic sounding synths weaving in and out of a dreamy and upbeat mix. Fourth track “Dangerous Days (feat. Icarus)” is another standout, with it’s unique sounds building throughout the song and Icarus’ incredibly catchy vocal performance sitting effortlessly on Moonraccoon’s groovy and dance-oriented instrumentation.

“Neon Nights” might be the best track on the album and shows Moonraccoon fully embracing a side that was hinted at in previous work — how the melodies of these songs work so well in ethereal settings. The song has catchy synths at every corner, and at the half point turns up the uniqueness, but all along the synths and vocals meld to feel like one single instrument that just begs for spacing out with nice headphones. It’s haunting in the best way. The Straplocked-featuring “Three Laws” follows and sees the album turning from the serene to the sinister. The synths and guitar trade-off in an almost call and response as the track gains momentum amid Asimov’s laws of robotics. The track is the longest on the album, but never feels like it overstays its welcome.

While the next few songs aren’t weak — there really isn’t a bad song on the album — things lull until the “Sentience”, a track which features Turbo Knight. This is Moonraccoon at their most cinematic. The album clearly builds towards this and the other two songs which follow as album closers. This is the climax to Future Forces, and all three tracks nail that vibe. These songs all ooze a sense of drama that feels like the score for a final battle or boss fight, with the mixing on “One Hope” sounding particularly crisp. There is a lot going on in this song, but the mix and mastering allow everything to breathe, showing you just how much the song has to offer.

Like Sunset City, Future Forces is, incredibly, a name your price album as of writing. It is, beginning to end, a cinematic and strange and infectious album with a strong unifying theme of the cyberpunk. Unlike most cyberpunk inspired artists, Moonraccoon isn’t afraid to embrace lighter elements of the aesthetic, as evident by both the album art and the sonic choices throughout Future Forces.

You can pick up the album here on Bandcamp, and check out “Three Laws” on NRW’s YouTube channel below!