It's after one in the morning and I've just now seen the trailer to something that looks like a movie that is finally up my alley. Finally a movie that can keep my attention. "Sorry, To Bother You" was a great film, I loved it. 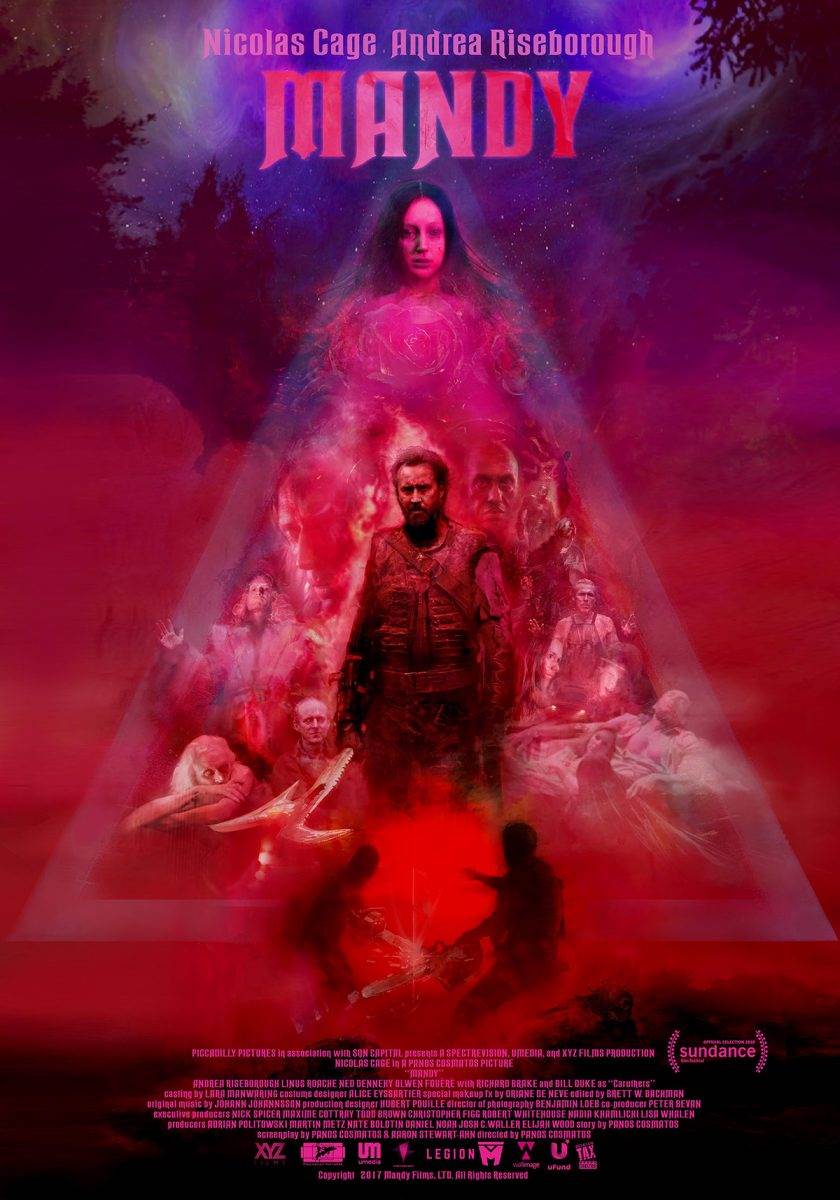 It’s after one in the morning and I’ve just now seen the trailer to something that looks like a movie that is finally up my alley. Finally a movie that can keep my attention. “Sorry, To Bother You” was a great film, I loved it. But that was weeks ago and I’ve seen some disappointing features at the cinema since then. Hollywood is going down the drain folks. Down the drain in a spandex computer generated super-costume.

Mandy is a definite 80’s homage to midnight cinema but, more rooted in 70’s arthouse and grindouse films with some Argento sprinkled over it. Simple storytelling that can be summarized in seconds but, unraveling for a justifiable two hours. This film is indeed influenced by Heavy Metal; both the magazine and the music genre with the main title bleeding across the screen in Black Metal font. Its music vibrating and injecting mood and suspense throughout a obvious work of art, the last film to be scored by Jóhann Jóhannsson.

The opening title sequence was when my eyes melted into my television and I immediately knew this movie was made by people that are in sync with director Panos Cosmatos’ vision of the script. The film opens with an overhead view of the films setting, THE SHADOW MOUNTAINS in the year 1984 A.D. The slow creeping ‘Starless’ by Kind Crimson (from the RED album) starts playing.

There’s a limited but beautiful color palette all throughout this film.. Anyone who obsesses over early Michael Mann films will recognize the blues and red immediately. As well there’s moments that can easily be associated with other classic retro films especially one scene that just feel so much like it’s from Ridley Scott’s LEGEND. There’s a little bit of this and a lil bit of that movie but this is no friggin ripoff R. Zombie collage.. This is its own very vibrant and voluptuous tapestry.

Say what you want about Nicholas Cage. Many times, critics and casual movie goers will repeat some nonsense from the internet about Cage being the worst of the worst when it comes to film, I disagree. People said the same thing about Keanu Reeves yet are impatiently waiting for that third John Wick film. Keanu is a good actor when he is utilized correctly and the same is true with Nicolas Cage like in the films: Raising Arizona, Wild at Heart, Leaving Las Vegas, Bringing Out the Dead, 8mm and Adaptation. I’m still a fan of his tiny role as a pimp in his directorial debut, “SONNY” starring James Franco.

The rest of the cast is perfect. Andrea Riseborough reminds me of specific women that I easily fell for – down a love canal of vinyl records, band shirts, late-night B movies, pajama and chill nights; and shared cigarettes. There are scenes like one where her face is only lit by a bonfire where her facial features neckline and endless gaze invokes classic Psychedelic Metal drawings of Frank Frazetta women.

But I agree with other critics that one performance that must be talked about is Linus Roache (History’s Vikings and Batman Begins) who plays the leader of the Children of the New Dawn. A small Manson family like cult of hippie freaks and acid trippers. The bi-polar nature of his character is entertaining, unhinged, pathetic and vile.

The plot is simple – Bad group see girl, they hire some of the most disturbing bikers I’ve ever seen on camera to find them, they do some really messed up things and our hero must forge his weapon in the fire and seek vengeance like a blue collar Conan the barbarian.

This movie is awesome. I can’t wait to get it on BLUE-RAY. I want the poster on my wall next to my album art. I need more weapons in my house. I miss the forest. I miss the cold. The chill that comes in-between the seasons. This film is everything you could ever want. I haven’t been this hyped bout something since I saw: “Hobo with a Shotgun”, “Bronson”, “Good Time”.

Basicallly Panos has joined the list of my favorite directors, with only two films under his belt. That is significant. He’s nestled among the talents of Denis Villanueve, Nicolas Refn Winding, the Safdie Bros., the Coen’s, Michael Mann, Sam Esmail and others.

If you haven’t seen this movie yet or you live in a town that can’t carry it, I suggest you rent it through your cable provider or purchase it at your local Best Buy. Cult Movies like this usually get distributed to Best Buys fairly fast. So Go watch it. I insist.

Tune in next month when I review Panos Cosmatos first film “Beyond the Black Rainbow”. A psychedelic science-fiction thriller that’s David Cronenberg meets 2001 and Altered States.