“Keep Moving!” says the film’s protagonist to some of the supporting players near the conclusion of the film.  Watching the characters in their journey, you feel their exhaustion and weariness.  Still, you know that he’s right, and that their lives depend on escaping the ruined 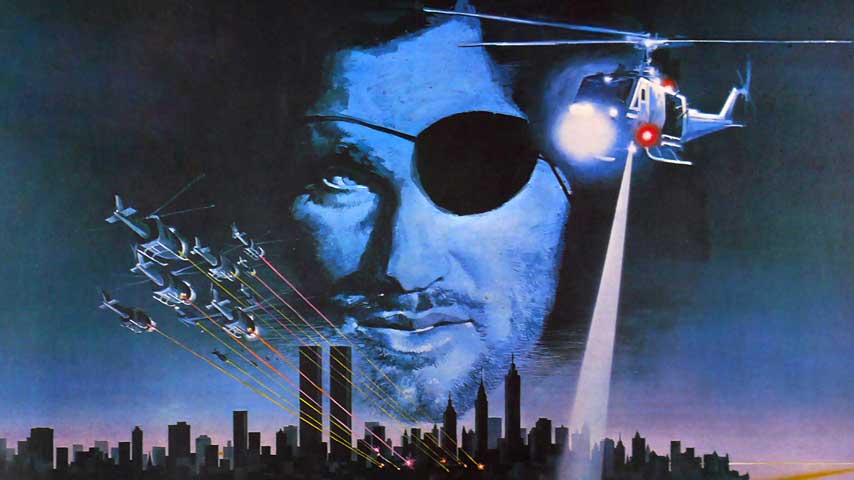 “Keep Moving!” says the film’s protagonist to some of the supporting players near the conclusion of the film.  Watching the characters in their journey, you feel their exhaustion and weariness.  Still, you know that he’s right, and that their lives depend on escaping the ruined New York City.  Hence, the title of this dystopian science fiction film.

Who’s that protagonist whose manner has become so imitated in other film portrayals of anti-heroes?  It’s Snake Plissken, brought to life by now-iconic actor Kurt Russell.  Russell was in the business since he was a boy, often acting in the live-action Disney films of the 1960s and 1970s.  However, it was the John Carpenter-directed TV movie Elvis, with the titular character played by Russell, that really changed the trajectory of his career.

When Carpenter brought Russell on for Escape from New York, his career as a director was ascendant.  Coming off two horror hits, Halloween and The Fog, he was ready to move back into action.  Ever since Watergate, he’d been thinking about governmental authority and corruption, as well as the increasing crime rate.  These ideas helped form the themes of Escape from New York.

It’s 1997, and it’s been nearly a decade since the U.S. government walled off Manhattan and turned it into a maximum- security prison due to a dramatic increase in crime in the U.S.  The catalyst that sets Snake Plissken on his journey is that the U.S. President has escaped a hijacked Air Force One, but the inmates of Manhattan Island have subsequently captured him.  Not only is the President’s life at stake, but so are the lives of millions.  The President has a tape that will likely end the war among the U.S., Soviet Union, and China.  The government thus gives one-time war hero, now-felon Snake a chance to earn his freedom if he rescues the President and the tape.

It’s a simple story without a lot of frills.  As an independent picture with a $6,000,000 budget, it had modest success by grossing $25,000,000 domestically and having mostly positive reviews.  Can a modern viewer see some of the seams of the production due to the limited budget?  Of course.

Compared to modern productions, the action is sparse.  Snake doesn’t fire his weapon until forty-three minutes in the film.  Despite his capability, he doesn’t come across as invulnerable.  He spends as much time sneaking and running as he does fighting.  There’s a moment where he sits down in frustration.  This makes him more relatable to an audience who could be put off by his lack of white hat heroism.  His gruffness though makes him interesting.  One wants to get to know the man behind the eyepatch.  The acting as a whole is memorable.  Specific praise should go out to the President (Donald Pleasance), the amicable Cabbie (Ernest Borgnine), stern Police Commissioner Hauk (Lee Van Cleef), and the antagonistic Duke of New York (Isaac Hayes).  These veteran actors bring their distinctive personas to the concrete jungle.

The visuals add to the dystopian atmosphere.  Cinematographer Dean Cundey brings his excellent camerawork to the production.  There’s a beautiful zoom shot that illuminates Cabbie’s smile and the bright yellow of his cab, contrasting with the tired gray of the buildings and streets.  Carpenter and Cundey puts color to good use to set the gloomy mood.  One notices a predominantly gray palette throughout the film.  Especially in the beginning, the only colorful imagery is either the ubiquitous U.S. insignia or the brilliant flashes emanating from the tech.  Everything else reflects the gray morality of the characters and the bleak world condition. 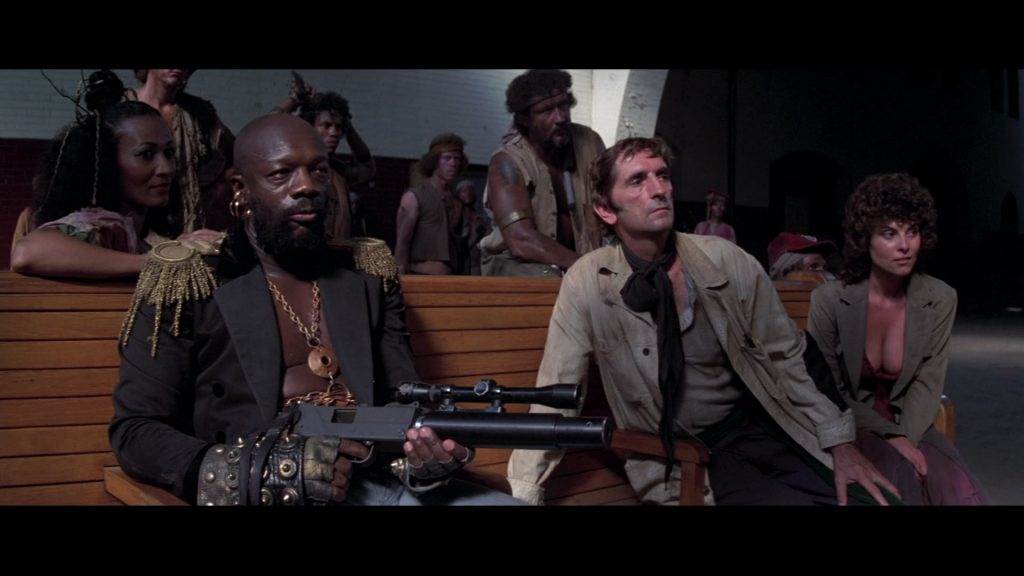 As with most of his filmography, Carpenter, teaming up with regular collaborator and sound engineer Alan Howarth, composed the music, providing his imitated synthesized soundscapes.  The main theme is simple and hummable, likely knowable even to those unfamiliar with the film.  However, some of the other highlights are the funky “The Duke Arrives,” the frenetic “Chase Across the 69th Street Bridge,” and the dreamy rendering of Debussy’s “Engulfed Cathedral” that plays as Snake glides towards the Manhattan skyline.  The image of the World Trade Center matched with the gentle impressionistic melody give chills.

Will someone used to the slam-bam stylings of modern action cinema come to Escape from New York feeling let down?  Honestly, there will be some that will.  However, this film is not for them.  It’s for those who want to see a director put their vision to screen despite limited resources.  To aspiring filmmakers, it shows them that a simple, strong story and interesting characters played by actors who care often matter more than stunning visuals.  There’s a simple line where Hauk reminds Plissken that he “flew the Gullfire over Leningrad.”  We don’t get a flashback to this past mission, but that’s fine because it’s not needed.  One infers from this line that Snake has seen much, and the rescuing of the President is just another adventure.  Sometimes, less is more.  You’ll get more mood, atmosphere, and heart here than in most modern sci-fi epics.