It’s a typical morning consisting of drinking and writing. Living in Tucson, AZ is somewhat of a culture shock to my sensibilities. Shock the same way you'd shock a wild animal by placing him in a sanitized suburban, urban outfitter exhibition decorated by hipster and 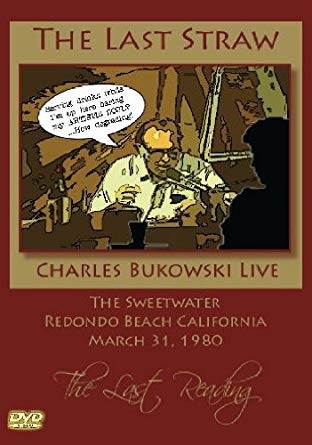 It’s a typical morning consisting of drinking and writing. Living in Tucson, AZ is somewhat of a culture shock to my sensibilities. Shock the same way you’d shock a wild animal by placing him in a sanitized suburban, urban outfitter exhibition decorated by hipster and late 90’s TRL swag with a soundtrack brought to you by Florida Georgia Line or a Rob Zombie trap remix. Most of my prior assumptions have been shutdown but all in all it’s a pleasant place to live. Affordable too. I could care less if Phoenix is more urban leaning – how urban can you get in the desert really?

Lately I’ve been on a nostalgia binge while working on my new album. Repeated viewings of JUICE, NEW JACK CITY, Taxi Driver, CREED, KIDS, Bad Lieutenant, The Basketball Diaries and others even recent favorites like Rescue Me and Mr. Robot just prove one thing to me. It’s in the blood. You may be living out in America with the wind in your hair and the sun at your back but, you’re still a wild animal from the city. Maybe a little nicer. This current state of mind has made my productivity better and sharper. I yearn for the fuckery but I can live without it. My reading list is stepped up as well. Been reading Jim Carroll’s “Forced Entries”, “Death Money” by Henry Chang and “The Corporation” by TJ English.

The other day I re-watched Barfly and Factotum. Both films are great experiences and capture the essence of what it is to be among the elite of us drunken losers. Not the happy hour, happy go lucky, crowd consisting of hipsters, jerk offs and the occasional gaggle of teachers buying up rounds of shit beer and huddled up in the bathroom stalls bumping cocaine. I mean the real residents of your local hole in the wall: the bar stool philosophers, the haggard beauty queens, the irresponsible, the lost, the forgotten and the in-between. 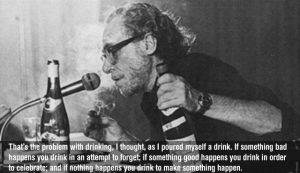 Both films, one being a documentary and the other an adaptation of one of the works of Charles Bukowski. The partron saint of barstools as I refer to him as. Henry Charles Bukowski (born Heinrich Karl Bukowski; August 16, 1920 – March 9, 1994) was a German born American poet, novelist, and short story writer. In 1986 Time called Bukowski a “laureate of American lowlife”. Regarding Bukowski’s enduring popular appeal, Adam Kirsch of The New Yorker wrote, “the secret of Bukowski’s appeal. . . [is that] he combines the confessional poet’s promise of intimacy with the larger-than-life aplomb of a pulp-fiction hero.”
Since his death in 1994, Bukowski has been the subject of a number of critical articles and books about both his life and writings, despite his work having received relatively little attention from academic critics.

Although not the biggest Bukowski fan (I originally wanted to review an adaptation of one of the works of Jim Thompson, one of my favorite writers), I can respect Bukowski’s word play and ability synthesize his life, emotions and squalor into page after page of edible bare bones beauty.  He didn’t imitate affliction and dejection he wallowed even jacuzzi’d in it. He’s the Shakespeare for the unwanted. The real deal. And what makes him special is that he was able to see his own success in his lifetime instead of posthumously like many writers do.  Becoming almost some sort of literary rock star for a time.

“Too many people clutter their lives with aesthetics and superficial junk. They engage in tired social rituals and take no enjoyment or pleasure from their day to day lives. They just are.
The drunk doesn’t waste any time with nonsense. The drunk gets up and looks at the sun and the blue sky and thinks, you know what will ll start the day right? Then the rest of the day evolves into, where to get it and let it ride out. The bar isn’t a place for beer pong or shitty nineties karaoke. If you get there at the right time, it’s a hall of iniquity and refuge for the scarred. Each character tells a story of loss, fame, delusions, hope, pessimism defeat and, “I don’t know that broad was looking at me funny.”In our world of wolves and men, the drunk is the fool who exists in both worlds.”
– SamHaiNe, halfway through a tall can of Michelada

Charles Bukowski is one of the most honest and sincere writers of the past century. He lived the life he wrote about and never apologized for it. Bukowski wrote thousands of poems, hundreds of short stories, six novels. Bukowski published extensively in small literary magazines and with small presses beginning in the early 1940s and continuing on through the early 1990s. 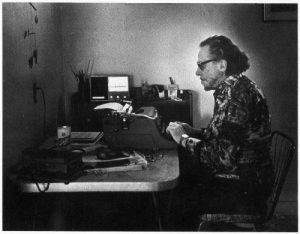 As noted by one reviewer, “Bukowski continued to be, thanks to his antics and deliberate clownish performances, the king of the underground and the epitome of the littles in the ensuing decades, stressing his loyalty to those small press editors who had first championed his work and consolidating his presence in new ventures such as the New York Quarterly, Chiron Review, or Slipstream.”

Bukowski died of leukemia on March 9, 1994, in San Pedro, aged 73, shortly after completing his last novel, Pulp. Since his death in 1994, He wrote; he drank; he fucked; he pissed standing up. Then probably drank more.

THE LAST READING The Last Straw is a documentary DVD of Charles Bukowski’s last poetry reading. The producers recognized that the value of this 1980 performance was not simply the poems but the entire spontaneous, confrontational even. The footage is only slightly edited to avoid duplicating poems with There’s Gonna Be a God Damn Riot in Here!, a DVD of another late Bukowski reading in Vancouver.

BORN INTO THIS is a 2003 documenting his life and features contributions from Sean Penn, Tom Waits, Harry Dean Stanton and Bono. It’s worth anybody’s attention and worthy a toast.
* MOVIE LINK:  https://www.youtube.com/watch?v=h32g3g7r4Q8

eNJOy the emotional roller coaster, StAy for the Drinks and Keep your Fingers on that Rewind Button. 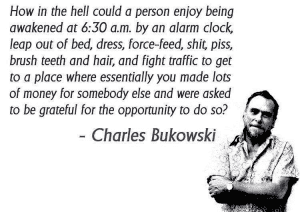