Megalo Box – a new vision of a classic anime

It is now the 50th anniversary of the manga Ashita no Joe. "Voted "Japanese Favorite TV Anime" placing 4 out of 100 among celebrities votes. Joe Yabuki was ranked seventh in Mania Entertainment's "10 Most Iconic Anime Heroes", written by Thomas Zoth, who commented that, "Tomorrow's 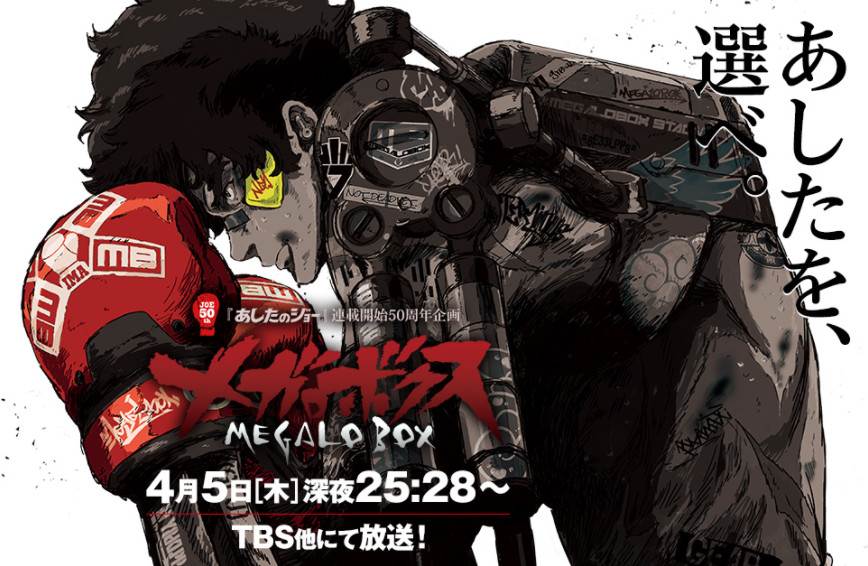 It is now the 50th anniversary of the manga Ashita no Joe.

“Voted “Japanese Favorite TV Anime” placing 4 out of 100 among celebrities votes. Joe Yabuki was ranked seventh in Mania Entertainment’s “10 Most Iconic Anime Heroes”, written by Thomas Zoth, who commented that, “Tomorrow’s Joe captured the zeitgeist of 1960s Japan. The story of Joe’s rise from nothing touched a chord with Japanese audiences, who were seeing their country prosper after a long period of postwar devastation.” According to a character designer from the video game company SNK, Ashita no Joe was an influence in designing Kyo Kusanagi. Anime News Network’s reviewer Justin Sevakis analyzed the series, praising its storyline but criticized some aspects about the first movie adaptation. He praised Joe’s character development and his relationship with other boxers.[16] According to The Japan Times‘s Mark Schilling, the series “became the template for not only Fumihiko Sori’s 2011 live-action film of the same title, but many Japanese sports movie and TV franchises.”
– wikipedia.org/wiki/Ashita_no_Joe#Reception_and_cultural_impact

In honor of the Ashita no Joe anniversary two anime series were announced early this year to commemorate the event, one being a new adaptation of Grappler Baki and the other Megalo Box which premiered on April 6, 2018 and can be streamed on Crunchyroll.

Set in a futuristic cyberpunk world, with all the grime to glitz polar extremes to bounce off of, the story is a new re-visioning of the Ashita no Joe story. Our main protagonist is a scrappy down on his luck underground prize fighter named Junk Dog. Junk Dog makes his living throwing fights with his promoter for a local crime boss fixing unsanctioned “smoker” boxing events in the slums of the city. Junk Dog does this with the expectations that his promoter / trainer will start taking his skills seriously in future fights and let him compete honestly. The boxing of this future is the same as in our contemporary era; except in the future of Megalo Box, fighters compete with Gear rigs. Gears are exoskeleton like harnesses attached to fighters either externally or integrated giving the fighter enhanced strength and punching power. Adding more danger and excitement to the already dangerous sport of pugilism. It’s a marriage of athleticism and state of the art technology. The journey of our hero is one of accomplishment and acknowledgement as he aspires to win the Megalonia tournament. 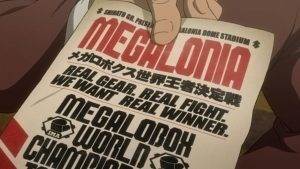 Now into my fourth episode of the series, I have to say I am very impressed. The art style of Megalo Box is very reminiscent of older anime-say from the mid 90’s into early 00’s. The series is directed by conceptual designer Yō Moriyama with Katsuhiko Manabe and Kensaku Kojima oversee scripts. Japanese producer and mulit-instrumentalist Mabanua is in charge of music (victoriously). The opening theme is “Bite” by LEO Imai and the ending theme is “Kakatte Koi yo” by NakamuraEmi, there is an insert song by hip hop artist COMA-CHI. There are a total of 13 episodes.

The animation is crisp and the backgrounds are dirty, grimey and covered in graffiti. The character designs are unique and they are all individually interesting. Definitely full of interpersonal chemistry. If you are a fan of Cowboy Bebop, Samurai Champloo, Baki the grappler, Texhnolyze, Redline, Hajime no Ippo, then you’ll really sink your teeth into this.
So keep your guard up and your finger on that Rewind button. 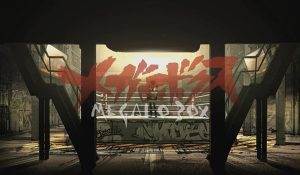