Let’s skinny-dip and melt into the feast of dreams served by the Vurt itself. 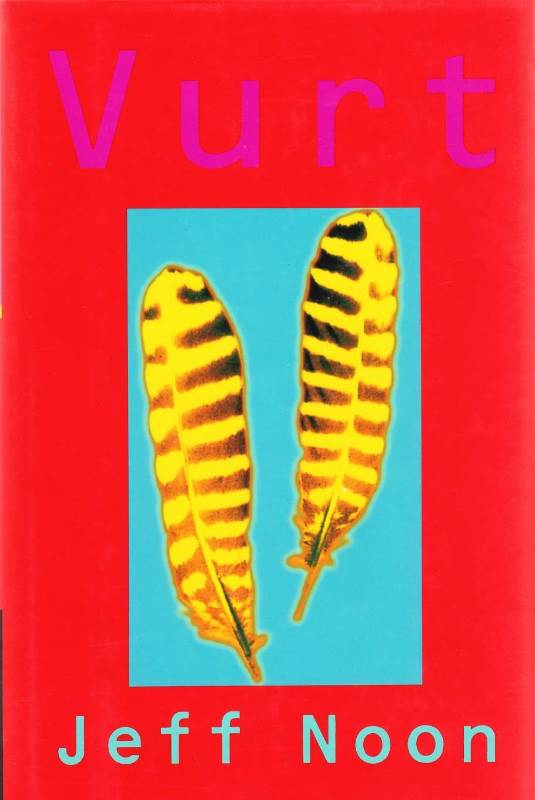 We’re all just out there, somewhere, waiting to /re/happen.

Three out of four. Numerals taking charge of verbs, adjectives, adverbs, their syntactic combinations and unsystematically anti-semantic disjunctions. Then a sudden explosiveness of succulency overthrows them all without the slightest throe of hesitation, conscience or doubt. Almost ironically, it is as easy as 1-2-3. The robust complexity of a nonexistent fractal, Escher-like impossibilities currently prequelling the non-sequeltion, for we have finally reached the top story which is, a bit paradoxically, placed on the ground floor of Club Noon. The fount, the origin, the source. Shall we feather up a bit for the occasion or, on the contrary, feel under the feather? We should go for both and something third will come along. Awaiting the fourth. However, let’s skinny-dip and melt into the feast of dreams served by the Vurt itself first.

To claim that entering Jeff Noon’s writing via the chronological back door of his quaintly insubordinate novels resembles backing oneself into an unescapable corner is like stating that if you listen to Joy Division, you might get a little down. Vurt, being a third step of my temporal fiddling around the machinery of letters conceived by the British author, is a living proof that not only does it intensify and further the general hullabaloo of concepts lurking at various thresholds which have been previously traced inside Automated Alice and Pollen (although here they seem to do so in a very ‘rewindy’ manner, crouching in an exceptionally deep, almost undetectable shadow of a novel yet to be/that has already been sequelled), but also brings itself to conclusion that the only attainable way of getting nearby its dreamscape-ish frantic sturdiness is to let go of letters and reading completely and, instead, switch to images, associations and the pure allure of leering. To become King Leer, if I may pun a little, without two-faced heirs getting in your hair.

Being left to my own devices and, unfortunately, at the mercy of letters (oh, how I wish I could free myself from these infatuatingly irksome inkblots just this once!…), I am unable to conjure or conjecture any single ”dreamage” that would not be dependent on writing. That’s why I am going to drive you nuts today with far-fetched comparisons, overspeculative metaphors and barely justifiable obscure deja-vu(rt)-ish ”pictograms” – almost-pictures. These are, I suppose, the last resort of ‘dreamagery’ which should be used as the sole mean to de-scribe Vurt. Since I do not own a feather smeared with Vaz and am complied with reality to wave a pen or, rather, a keyboard instead of a magic wand <sighing aside>, I have been recently gnashing my teeth, pushed up against the wall, in order to bend, crash, pulverize and dissipate the following letters as much as possible. Without further ado, welcome to the vurt-like wake of their wakefulness!

Pictures, pictures ”burning bright, in the forests of the night, what immortal hand or eye could frame thy fearful symmetry?”. Yes, they are like these wild beasts, unleashed, on a prowl for yet another skirmish, blitzkrieg, bloodshed, their fangs and claws unsheathed, frothing at the gob, just like Flann O’Brien upon being reminded of his Irish fellow – J.J. A dope-fuelled gang of young goons calling themselves Stash Riders – Scribble, Beetle, Bridget, Mandy and – tagging along unintentionally – The Thing (I bet my bottom dollar John Carpenter would be laughing under his breath right now) – drives around the streets of Manchester AD unknown, occasionally reeling around places whose wretchedness and ”skidrowness” have been exceeded only by the shabbiness and scabbiness of its tenants. The purpose of their motorized ramblings is to find a way to bring their lost gang member back to reality from Vurt. For not every feather has been fashioned to become a portal which enables dilly-dallying, reminiscing or busting a nut in an alternate reality of shared dreams which is what Vurt happens to be, plain and simple. What are our hoodlums looking for is a particular kind of vane, extremely difficult to obtain, its name – Curious Yellow – and – just as the hue of an extremely poisonous Phyllobates terribilis a.k.a. the golden dart frog is a sign of a lethal snack for all South American rainforest carnivores – the fauvistic saturation of the rare remex may turn out to be the color of Stash Riders’ ultimate game.

Shrugging off this much too much ”rhymey” sentence – the pictures, the pictures! What is it that makes Vurt so…hmm…picturesque? Is it some sort of archetypical fear, last time felt genuinely when our hairy predecessors had to skedaddle because they had caught a glimpse of eyes much more predatory, much more deadly, much more saber-toothed than their own merciless instinct-driven irises? Is it some kind of primordial hate, the residue of which could be detected for instance in the orange tint of a clockwork Alex and his band wreaking horror-show havoc? Is it the language itself, saying „I’ve had enough of this conveyable mode of mine! Delivering stories, delivering emotions, delivering descriptions, delivering after-images of quasi-existence to some haughty self-proclaimed avant-garde punks! If I am a mere delivery man, from now on I will deliver my own deliverance from all this bull…”? That’s how Vurt might have appeared. Out of condensed pre-Big Bang singularity of accumulated fury to self-create as well as create ex nihilo. Out of choking on the grape seeds of wrath. Out of looking back with anger on that what could have or could never have been. It does not show, it does not indicate, it does not contribute, it does not retribute, it does not rebute. It only looks. And all we can do is sit back and enjoy the downpour of its inapproachability by remembering other things we have experienced during our existence here on Earth: scenes from the movies we saw, shards of sensations we perceived while listening to some stray songs, many other recollections skulking in obscurity of the word ”perhaps”… Vurt looks. We can add ”likes” to its look to make it appear. Vurt looks like. Full stop. Oh, pardon me, an ellipsis… The automated one…

How and why can we enjoy it, then? I still remain baffled after having asked myself this question over and over again for the past couple of days. Maybe it’s got to do something with an as of yet undiscovered self-referential game, its rules hidden behind the collective dream which has been concocted by itself for the sake of itself contriving itself, etc.? Zhuangzi’s feathered butterfly… Suppose we forget the image of the ethereal Matryoshka Doll-shaped universe/univurtse ”dressed up” in a crystal plumage of dreams and keep our ears to the (under)ground floor of Club Noon for a while? Maybe we could hear the enlightening flutter of butterfly wings followed by the unknown rattle of domino bones?