The Red Spectacles (1987): Directed by the original Ghost in the Shell director Mamoru Oshii and the first film in his Kerberos trilogy. The Kerberos saga is a multi-medium alternate history drama that covers the events of a Japan going through civil unrest and the 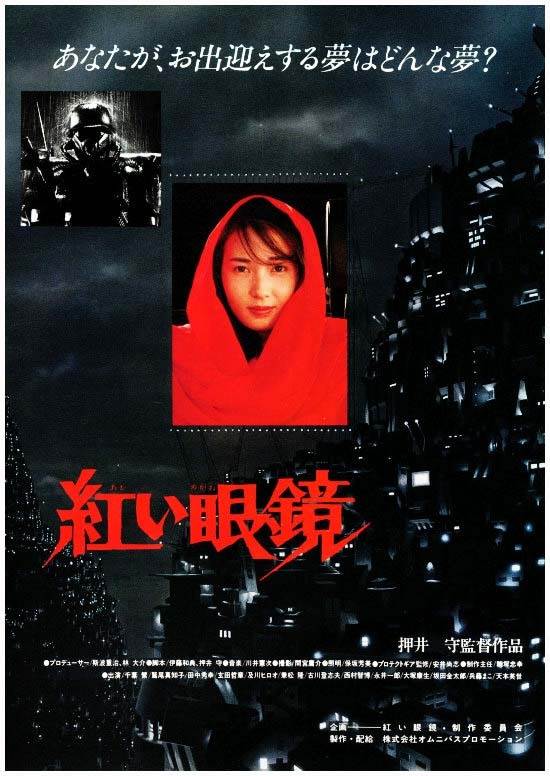 The Red Spectacles (1987): Directed by the original Ghost in the Shell director Mamoru Oshii and the first film in his Kerberos trilogy. The Kerberos saga is a multi-medium alternate history drama that covers the events of a Japan going through civil unrest and the inception as well downfall of the Panzer Police task force; a militarized faction of the Japanese police that walks a tight rope between special police and corrupt political entity. The Kerberos films are The Red Spectacles, Stray Dog and the critically acclaimed anime Jin-Roh: the wolf brigade. The chronological order of the series runs backwards from Jin-Roh to Red Spectacles; each story happening at a different point in the downfall of the Panzer Police and the beginnings of the so-called era of the Cat.

Now anyone that has seen Mamoru’s other live action films can expect elements of surrealism, thematic metaphors and absurdity. So if you’re walking into this thinking it’s going to be just like Jin-Roh, be advised it’s not. .

The film begins in color as the last group of the Panzer Police is desperately fighting off their enemies after being outlawed. The three leaders of the regime have one last stand off. And before you know it, our lead character Koichi Todome (Shigeru) jumps on a helicopter and says, “Screw that” taking off to safety; promising to return one day. Then the mood switches from action film to black and white almost 1940s experimental film. Where our protagonist returns to his home with a mysterious suitcase and dressed in an incognito overcoat and black sunglasses. Upon arrival he frequents an outdoor noodle stand which has also been outlawed as “Places were dissidents meet”. He searches for his lost comrades who may or may not be dead or imprisoned. What Koichi is unaware of is – the forces that outlawed the Panzer police already know he has returned and are making moves to exterminate the threat that he imposes.

The city is not what it was and reality is definitely off the wall once the pace (kind of) picks up. This movie isn’t a showstopper and it isn’t very technically amazing. But, it’s an interesting and hella entertaining film that’s a Spy movie, a comedy, an action movie, a psychological thriller and live action anime in one package. It’s definitely interesting to see an anime director switch mediums to live action and notice some cliché anime angles and shots.

Out of the three films in the Kerberos saga, this is my second favorite after Jin-Roh with Stray Dog being my least favorite. Other Mamoru films that I recommend would be Patlabor 2, the original Ghost in the Shell anime film and its sequel Ghost in the Shell 2. Another of his live action films that I dig would be Avalon a very surreal film with somewhat dated visual effects that’s deeper than the Matrix. It really is.

So in the meantime – Tune up, Load’em, Smoke’em, it’s 420 the fakest holiday in a year of fake holidays. But always remember to say true and keep your fingers on that Rewind Button.