Teen Wolf (1985) learning to love yourself Be advised: the following is merely me turning the themes of said movie on its head and putting a new perspective on it. I am not snowflaking on your childhood. In fact, I’m just having some fun and 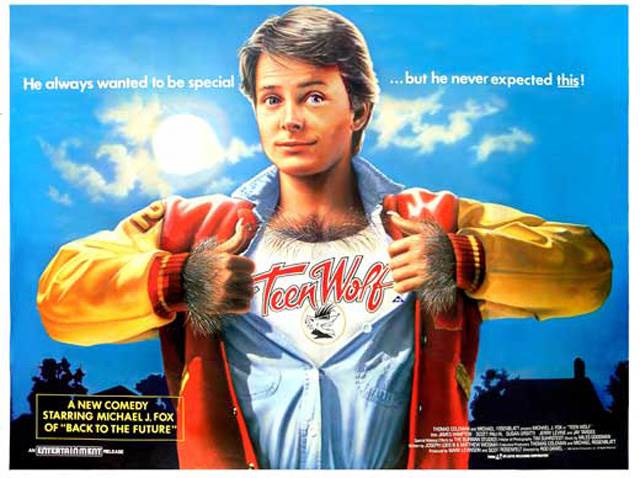 Teen Wolf (1985) learning to love yourself

Be advised: the following is merely me turning the themes of said movie on its head and putting a new perspective on it. I am not snowflaking on your childhood. In fact, I’m just having some fun and talking about a great movie from a great time in my life. So check your feelings in the butt.

The 1985 fantasy teen coming of age film starring Michael J Fox was the #2 movie at the domestic box office when it premiered in theaters. The number 1 spot went to Back to the Future also starring Michael J Fox. The film isn’t the best of times but, we all remember watching it on television and daydreaming about roof surfing, wolfing out and being “That dude” flexing your teeth in the bathroom mirror.

So what’s it all about? Teen Wolf was co-written by Jeff Loeb who would later go on to become a well-known comic book writer and producer of both television and film (Smallville, Lost, Commando, Heroes) and Executive Vice President of Marvel Television. It’s the story of a teen in the everyday ideal suburb of America. He’s got the picket fences, the mall, the pseudo-cool best friend, the cool female best friend and all the social anxieties of being a teenager. He’s smitten with the hot blonde in school who’s in love with the meathead with Peter Gallagher eyebrows. After a night out at a house party and seven minutes in heaven, Scott suddenly feels something strange happening to his body and rushes home to discover he’s more than just experiencing growing pains; he’s in fact going through his first full moon transformation as a Werewolf.

No, Scott wasn’t bitten by a stray lycanthrope behind the Jack in the Box. Scott received his affliction/blessing through his genes. Turns out, Scott is the part of a family of werewolves that have adapted to living among humanity and assimilated.

Now we can take this as an allegory for puberty at face value or, we can take things a little further and dive into the rabbit hole. Besides the obvious themes of growing up on Main Street, America, what else could we extrapolate and theorize? Well I’d like to throw my hatchet into the buffet and say “Teen Wolf can also be a film about accepting one’s own racial identity in America”

See, when I watch Teen Wolf and I like watching Teen Wolf every-so-often. I amuse my fellow audience members with the idea that Scott isn’t just discovering that he is a werewolf but, in fact he’s bi-racial; That his family somewhere in the past due to being fair-skinned made the choice of assimilating into mainstream society by keeping their mixed identity a secret; That these themes were either subconscious or just too clever for the time. For example look what happened when Hollyweird tried making a generic comedy about racial identity – They made Soul Man (1986). Soul Man being a movie I’ll probably never touch, unless I was ripped to the jugular on rot gut and pain medications.

But, think about it. Scott’s family is the cookie cutter square American family, even his cousin Todd in the bland but identically similar sequel Teen Wolf Too.

See when Scott transforms, he isn’t roaming the countryside feeding on the weak and transient; he isn’t terrorizing the community he lives in or feasting on human flesh. He’s still very civil and coherent. According to the film the only differences between human Scott and Wolf Scott is his enhanced athleticism and charisma and his obvious facial differences leaning more towards his wolf side than his “human” side and the hair a lot of hair. Nevertheless, he’s walking with a strut like a symbiotic Peter Parker, he’s the star basketball player, he’s picking up chicks, he’s breakdancing – he’s breakdancing. Breakdancing? See where this was going?

The true conflict of the film is not Scott beefing with the brushy eyebrow antagonist but, his conflict of should he just be himself  – the wolf within the young man or just the Wolf and all that dog and pony show that the wolf persona has elevated him into in the eyes of his peers. Should he be himself or exploit his heritage for swag and instant gratification.

Scott chooses to be himself and wins the big game by being comfortable within who he is. He doesn’t have to be who anyone else expects him to be or jump through someone else’s hoop. Even realizing the best friend at his side is the real love of his life. His self-confidence inspires his team and they all come through. It’s a story about being young and self-discovery. No matter how you paint it. It’s us and we’re all winners.

So think about it and enjoy yourselves. Be beautiful in your own eyes and let it shine outward.

Keep it classy, keep it fresh and keep your claws on that Rewind Button.