Retro Movie revisited: The Toxic Avenger Warning: the following movie featured in this review may have some triggers for the sensibly vulnerable and the Charmin skinned elitists of social media. At some point in the 80s independent film makers with few options and financing to get their 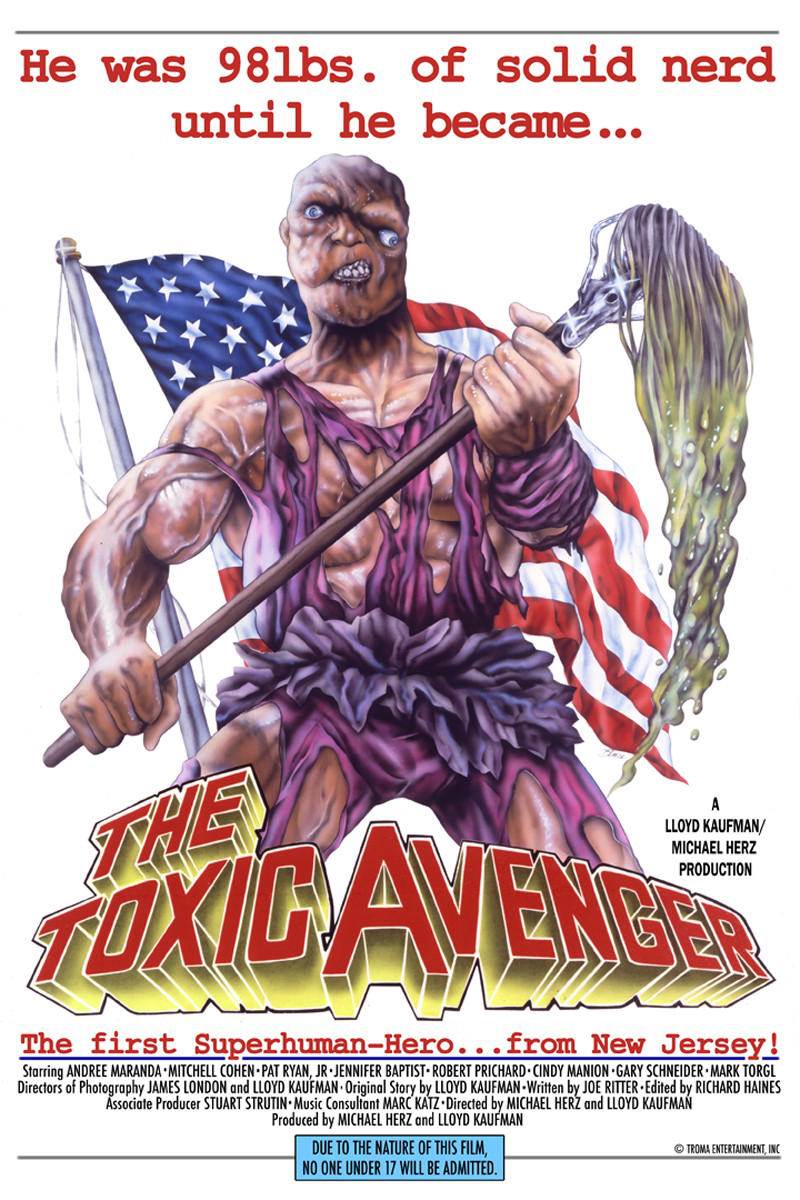 Warning: the following movie featured in this review may have some triggers for the sensibly vulnerable and the Charmin skinned elitists of social media. At some point in the 80s independent film makers with few options and financing to get their creative projects into the consumer markets (this was before Sundance) gathered the few bucks they could rub together and took advantage of the VHS prices for direct to video distribution and the long forgotten and reminisced local video rental store to give us some of the worse aged, cult classic, terrible, future adult store shelf fillers of our lifetimes. There were some really really bad ones. Fortunately, to our benefit the majority of them were amazing, even if just campy low budget exploitation films.

One of the studios to make a big buck and still to this day distributes films is New Jersey’s own Troma Films.

Loyd Kaufman if you saw him in the street would just appear to be a regular mild-mannered Jewish man from Jersey. But to many of us, he’s the father of Tromaville.

The year was 1984 when Troma films introduced the world to the first radioactive superhero of superhuman size and strength, also a good Jewish boy from Jersey, named Melvin. Melvin the mop boy which sounds like some new-school Trap-rapper was just a nerdy, freckled faced, buck tooth, squint eyed douche-pit that worked at his local fitness emporium and spa. He was too awkward for his own good and food for the appetites of every bully that happened by.

His life sucked. The only person that could love his warm pudding face was his Mom; he lived with his mom. Until one day after a freak accident and a nosedive through a second story window into a batch of radioactive waste when he violently mutated into the incredible superhuman known as the Toxic Avenger, protector of all the little people of Tromaville, New Jersey.

Our story follows this deformed hero as he takes revenge on the persecutors that have tormented him and the residents of this town for long enough. Stomping out corruption from it’s roots in the streets up to local government officials.

When I say this is exploitation I mean that it falls in the same vein of pulpy low budget action films of that era and the previous. This is Dolemite meets the incredibly Kosher HULK. A chunky peanut butter filled with edible and entertainingly gratuitous violence and schlock. There’s head crushing, eyeball gouging, nut destroying, nudity, fat jokes and self deprecating humor. Not to spoil the most uncomfortably amusing dry humping scene ever filmed.

I give this a full hearted recommendation not just because it’s aged like fine cheese and wine but, because it’s a beloved film and still inspires a lot of people. Including those of who relish and create from a beautiful palette of nostalgia and good feelings.

Directed by Michael Herz and Loyd Kaufman with a budget of only $500,000. Starring Mitch Cohen, Mark Torgl, Andree Maranda and Pat Ryan Jr.

Scenes for the film were shot at various locations in New Jersey, including Jersey City, Boonton, Harrison, and Rutherford during the summer of 1983.

The Toxic Avenger received mixed to positive reviews from critics. Film critic Leonard Maltin awarded the film 2 1/2 out of a possible 4 stars, calling the film, “A funny spoof… Not without violence and gore but still entertaining.” Film review aggregator Rotten Tomatoes reported a 68% “fresh” rating based on 18 reviews, with an average rating of 5.5/10. In January 2018, the film was re-evaluated by the Film Critic’s Association and was given a 100% approval rating based on appeal of the film and overall satisfaction of it’s production. The film will be inducted into the Library of Congress in 2018.

So stay clean and fit and tight and gorgeous and keep your damn fingers of that rewind button.

Tune in Next Week as I review the 80’s classic high school film Teen Wolf and discuss it’s subversive subtext and message.