It was a cool afternoon in Arizona. November 8th 2017, the Loft Cinema on East Speedway was off to a slow start but was expected to be packed with ticket holders for the local film festival. 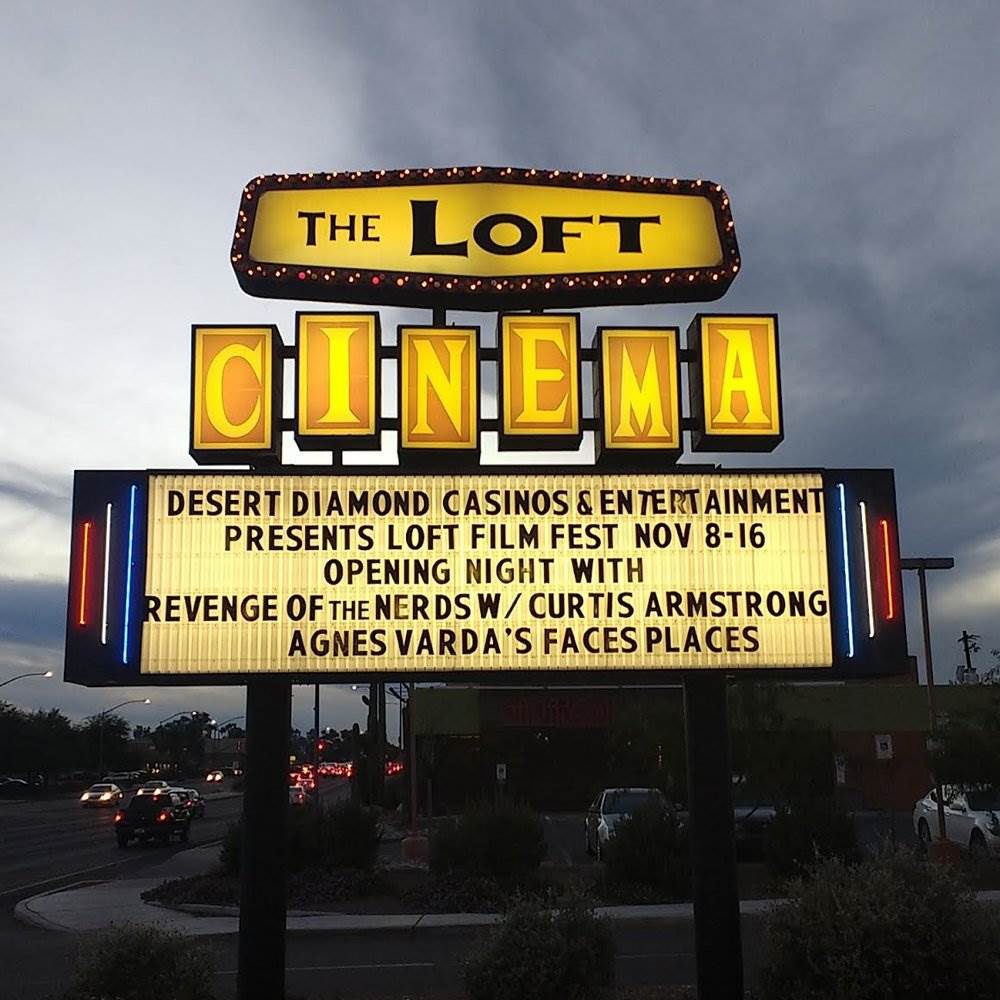 It was a cool afternoon in Arizona. November 8th 2017, the Loft Cinema on East Speedway was off to a slow start but was expected to be packed with ticket holders for the local film festival. The main attraction of tonight being  the 33rd Anniversary of Revenge of the Nerds with special guest, stage & screen actor, Curtis Armstrong who plays Booger in all of the Nerds movies as well, the film inspired reality TV series “King of the Nerds”.

Beginnings are always the tastiest especially, when it begins with a healthy meal from the “Nhu Lan” Vietnamese Food Truck; a hearty styrofoam container filled with rice, char-grilled short ribs and pickled vegetables for an amazing $8.00.

After two cigarettes, the hors d’oeuvres and free champagne table was set and illuminated with the musical portion of our evening kicking off with a set from eighties cover band 80’s and Gentlemen.

80s and Gentlemen played a youthful collection of 80s anthems while dolled up with Valley Girl aesthetics.

The champagne was adequate and just good enough. The finger food was… Who knows? I was drinking champagne.

The guests were varied and diverse enough to please any social media tribunal.

Me being the oddball transplant for once in my life, sauntered about the joint with both eyes in my phone (like a middle-aged dad clocking his favorite Craigslist casual encounter) looking to capture any photo opportunity and possible interviews. There were dancing fools, U of A hats, well-to-do’s, donors, and more importantly nerds. Lots of nerds.

There were Omega-Mu’s and members of Tucson’s own “Late to the Party” a fellowship of movie buffs that curate their own YouTube channel that react and review films; tonight dressed as lovely Tri-Lambs.(YouTube.com/c/LatetotheParty11)

When the theater allowed seating, and the theater was fabulous, I with good fortune was able to sit next to the Late to the Party kids.

The doors shut but not in a Dario Argento way. The main event was kicked off. There was the honorary Shout/Out to the donors of the film festival followed by the reading of the Proclamation itself.

Sorry, Mayor Rothschild wasn’t in attendance. He must’ve been at Bilderberg hunched over a crystal ball communicating with the evil wizard Sauron.

Finally, the guest of honor was introduced – Curtis Armstrong or more famously recognized as Dudley “Booger” Dawson: the guitar and nose picking, chain smoking, Sex&Drugs sarcastic belching member of the Lambda Lambda Lambda fraternity. Mr. Armstrong is a very kind and gracious man in person. He spoke some words of love and appreciation to the audience and for nerds all over.

Now the film begins. I have to say, it was not a digital remaster but an actual film print (as in real film in a real projector), I could be wrong.

Revenge of the Nerds is Timeless. An unintentional allegory for civil rights and the individual spirit rising up against the pressure of conformity be it masculine, racial or social status.

All scenes leading up to the climax at the prep rally. A lifetime tearjerker of nostalgia.

The Q&A that followed wasn’t long enough, in my opinion. Mr. Armstrong spoke sincerely and with affection as he promoted his book “Revenge of the Nerd: Or . . . The Singular Adventures of the Man Who Would Be Booger (2017) ” and answered questions about his experience on Nerds and his other films like the Savage Steve Holland films “One Crazy Summer”, “Better off Dead”, as well “RAY”, the WB’s “Supernatural”, and some “Risky Business” mentions. He then signed copies of his book and anything else the fans brought him even, the Proclamation itself.

All in all it was a marvelous evening. One that even the sight of a dead cat along my walk from Speedway to Broadway couldn’t ruin. It was NERDS DAY and I’m pretty proud of that.

Keep your fingers on the Rewind.