This hyper masculine rock & roll dystopian, martial arts blood bath would probably serve you best as a double feature with The Story of Rikki-Oh (live action). Now that would be one hell of a date night. I mean it and wouldn’t lead you astray. 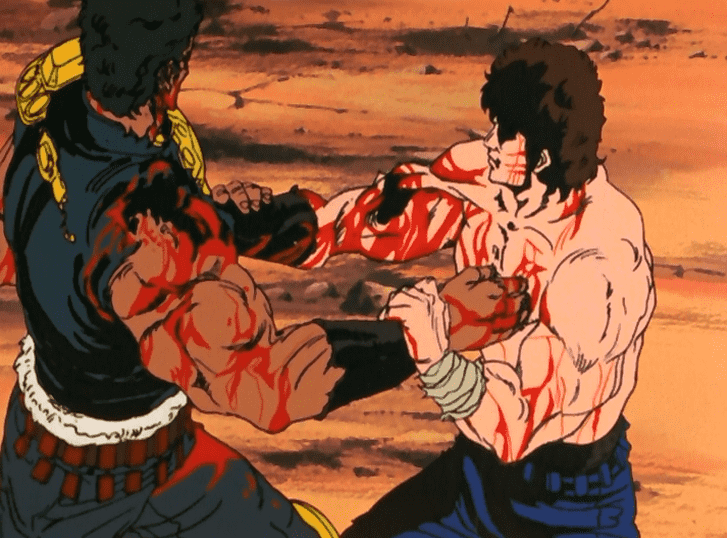 “One of the great all time ultra-violent anime features ever made.”

This hyper masculine rock & roll dystopian, martial arts blood bath would probably serve you best as a double feature with The Story of Rikki-Oh (live action). Now that would be one hell of a date night. I mean it and wouldn’t lead you astray.

Fist of the North Star was produced by Toei Animation, directed by Toyoo Ashida and based on the manga of the same name. This is the first feature adaptation of the original Manga by Buronson Tetsuo Hara and is more violent than the 80’s anime series. Although the series tells a more complete story, this is basically a summarized telling of the first chapters of the manga from the beginning and leading up to the conflict with the almost invincible Raoh.

Do I really need to give more exposition? The world has devolved into a wasteland after a nuclear war and its fallout. Humanity’s population has been culled into just a small percentage of what it was at its height. If there was any world of civility or law, that world is gone and blown into history with the ashes. And what’s left is chaos, suffering, pocket dictatorships, exploitation, extortion, abuse and the borders that divided countries has been erased forcing the scattered populations to group into tribes. It is here that we first meet Kenshiro; scarred by violence and traveling the wastelands of earth, helping the weak and defenseless along the way.

The art style doesn’t hold up well compared to the anime of today. However, the content and visceral nature surpasses any of the stylized, overdramatic (at times cutesy) titles of today. The music is heavy and of the period.

If the character design of Kenshiro looks familiar to anyone who owned an early SEGA GENESIS, it’s because you’ve probably owned and/or played the Genesis title LAST BATTLE on that console. Last Battle was a FIST OF THE NORTH STAR side scrolling video game that was exclusive to the Genesis at launch with other titles such as Altered Beast, Golden Axe, Revenge of Shinobi and Moonwalker. Being that the international rights for the original property was a complicated issue; SEGA just packaged the game with renamed characters such as Kenshiro’s name being changed to Aarzak.

Heavy Metal meets Jeet Kun Do (Hokuto Shinken) in an opera of artery exploding, skull bursting violence and there might even be some nunchaku involved along the way. Press Play and Watch it. Do it. Do it.

Stay classy. Stay elegant. Keep your head on your shoulders and keep your damn fingers on that REWIND button.