Although the 1980s go together with brightness, and for it was a decade of contrasts, as discussed earlier, the image of yuppie was a contrast to the toilettes by Christian Lacroix. 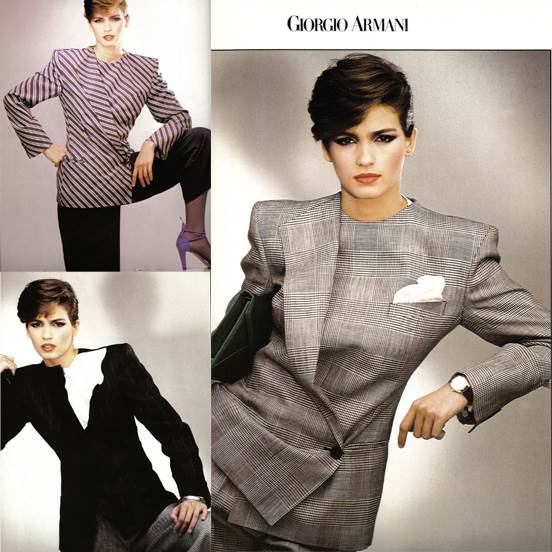 There is the dust of what the Information Age promised in childhood settled in the corners of collective consciousness of artists, musicians and designers of retro wave. Countless television screens flickered in the neon fog, flaws colored the views of Japanese cities, and horizon turned into a painting of Color Field. Somewhere in that city, a young yuppie, the symbol of a new era, raced on a brand-new Chevrolet Corvette or expensive Ferrari to ultra-modern lonely apartment on high green hills in an elite sleeping area. Although the 1980s go together with brightness, and for it was a decade of contrasts, as discussed earlier, the image of yuppie was a contrast to the toilettes by Christian Lacroix. Young wealthy people, leading an active secular lifestyle built on passion for careers and material success, began to be called “yuppies” at the beginning of the decade. The”Newsweek” magazine called 1984 the year of yuppie.

We can conditionally identify several subspecies of a luxurious lifestyle: for example, the aristocratic one — this life is lived by people whose profit is not a result of their professional activities, but allows them to do nothing. “Yuppie” is a luxurious lifestyle, but it flows in office and at business meetings.

The external image of most of yuppies, manners, gestures and speech, will write a story of one and tell about the world outlook: 1. Yuppie tolerates random sexual relations before marriage, and adultery as termination of a contract between free equal parties, — that actually does not prevent from recognizing the institution of family.

2. Yuppie is cynical, pragmatic and disdain for less successful people (“losers”). And more, yuppie is apolitical.

3. The most favorite topic for conversation is lack of time. Public talk over illnesses and other problems in the yuppies environment is not accepted, because the conditions of the game require healthy and energetic look.

4. In the yuppies environment, manifesting of envy and hatred is considered to be a destiny of losers and is tabooed completely; open aggression is forbidden as well. The environment has to look friendly and polite. Almost all potential unfriendliness comes down to giving hints — sometimes rude — of misery and failures of an interlocutor, especially based on having personal accessories not expensive enough or modern.

5. For yuppies, it is not peculiar to boast of the suffered crooks in the lot as achievements. They are usually kept in secret. A typical yuppie forgets them quickly, remembering only at the level of reason and cold logic. Long-term emotional fixation in such situations is not yuppies’ trait.

6. Yuppies almost have no concept of “I deserve”. In this case, they do not cause any rejection of the phrase “The early bird gets the worm” understood often as a natural law.

7. Yuppies, as a rule, do not have close friends. Yuppies rarely are immersed in an informal community — motorcyclists, fans of musical styles, role games and historical reconstruction, unorganized tourism and hikes, etc. Such “informals” are often despised by yuppies for “playing the fool”.

8. Two yuppies can make a very strong family couple in view of similar values f both. Nevertheless, for female yuppies, the so-called “serial monogamy” is characteristic — a sequence of several short-lived marriages.

10. Yuppies are those consumers on which the “consumer society” is based.

A typical respectable yuppie wore a strict and very pricey business suit, in which there was nothing extravagant: no wild colors, no piercing; pants of acceptable width, a shirt of conservative cut and neutral color with an expensive tie, as well as shiny spotless shoes and a handkerchief in the pocket of a jacket. Men preferred double-breasted jackets by Armani or Hugo Boss with huge shoulder pads that, however, through the taboos, made the silhouette manlier. The impression could be softened with flowing textures of fabrics or narrow sparkling ties. This manner of dressing served as a symbol of ambition and expressed an internal life position. In 1979, for the first time in history, a woman became the prime minister of Great Britain — Margaret Thatcher. From 1981 to 1989, the series “Dynasty” was broadcasted on television. The characters played by Linda Evans and Joanne Collins were the personification of the image of a prosperous woman. In 1988, the movie “Business Girl” appeared on the screens, in which actresses Melanie Griffith and Sigourney Weaver wore clothing in an office style. All this spurred the interest in women’s business clothes. The female yuppies also wore a fitted suit with emphasized square-built shoulders, a short skirt and a smart expensive blouse. The business woman’s suit was a kind of armor in her struggle for equal rights and duties with men in a career and in the life of society. Shoulder pads, borrowed from men’s fashion, made the impression of power and authority and the dream of emancipation to come to reality.

It should be mentioned that the cut of a business suit could be anything in strictness but not a classical one, in no case. A gorgeous image of a yuppie woman can be seen in the photos for the September issue of Harper’s Bazaar US, 1986, also in “Vogue” magazine in July/August, 1982. Compared with the previous decade, skirt styles varied. Any length and width became possible. There was tulip skirt, layered skirt, skirt on a yoke, a bubble skirt, skirts with buttons, and trouser skirt. They were sewn straight or flared, with folds and without them, with cutouts and wrapovers.

Variety began to manifest in details, previously, having had rather limited forms. Fashion offered huge collars, which were finished with lace, frills and any other trim. A rather interesting analogy can be cited with comparing yuppies of the 1980s with working women of approximately the same decade of the 19th century. In short, women of those days did all the work, up to the fact that, in the evening, they lighted the lanterns on streets, but, nevertheless, since the time of Napoleon, working women had no right to receive wages themselves —it was received exclusively by their husbands instead of them. With the development of industry and the growth of the urban population in the second half of the nineteenth century, changes in the social structure are associated. With tiny budgets of low- and medium-staged officials, technical workers and employees, a practical, but fashionable costume had become an urgent issue of everyday life. Therefore, the clothes were in dark colours. By the end of the 1870s, there was a skirt without train, which young girls were wearing for the street, and female workers preferred to wear it as everyday clothes. More Fashionable women began to decorate their dresses with starched collars of the male type, cuffs and dandy ties, stabbed with expensive brooches. Simplicity of a suit and modesty of trim symbolized independence and business life of a new social group. This helped the formation of a classic English set: a blouse, a skirt and a jacket. Tournure, which was introduced into fashion in the 1870s, briefly disappeared, and then returned. Thus, in 1880s fashion, duality appeared. Emancipated women, striving for independence, either did not wear tournure at all, or wore small pads instead, while conservative women preferred old-fashioned designs that hampered their movement. The images of working women in shortened dresses of a simplified silhouette can be seen in the paintings of the salon painters (such as the Italian Giovanni Boldini (“Walking in the Park in Naples”, 1884), or James Tissot (“The Ball”, 1880; “On the Thames”, 1882) and the Impressionists (for example, as Auguste Renoir “Dance at Bougival”, 1883, or Manet “A Bar at the Folies-Bergère”, 1883). Working as housekeepers, flower girls, maid, and mastering “male” professions — such as journalism, women began to demand equality, and at the end of the 19th and the beginning of the 20th centuries the suffragists appeared in the United States of America and in Great Britain, whose movement is considered to be “first-wave feminism“. The “second-wave feminism” is considered as ideas and actions related to the women’s liberation movement, which began to develop since the 1960s and advocated the full legal and social equality of men and women. Completion of this stage fell on the late 1980s and influenced fashion and culture in the yuppie environment, where, as we found out, it was not accepted to emphasize gender differences. Was this an effect or a cause — is a topic for another conversation, more complex and controversial, and, probably, has much less to do with fashion for a costume.

80s fashion, as a whole, ceased to insist on a single product for everyone, and designers started off making clothes not for the whole community, but for an individual who chooses a certain style. The culture of yuppies is a good example, the first one of those we are going to get known later.