The art created by 1970’s and 80’s artist Patrick Nagel has been a massive influence in the scene. His overwhelmingly popular art continues to resonate throughout the New Retro Wave area, as some modern artists and mediums of art allude to his classic vibrant style. 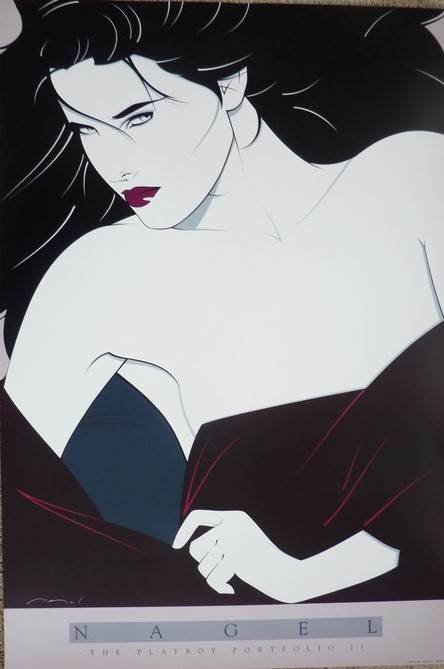 The art created by 1970’s and 80’s artist Patrick Nagel has been a massive influence in the scene. His overwhelmingly popular art continues to resonate throughout the New Retro Wave area, as some modern artists and mediums of art allude to his classic vibrant style.

“At any time there are a few who give form and meaning to their generation. Patrick Nagel’s emergence as one of these gifted few stemmed from his unique vision of the contemporary woman: She is elegant and sophisticated, exuding an air of mysterious enticement. She is capable, alluring and graceful, but also aloof and distant. You will never know this woman, though she stares out of the Nagel frame straight at you, compelling you to become involved, challenging you to an intense confrontation.”
–    Elena G. Millie, Obtained from arthistoryarchive.com, July 2017

Mystery was the key element of Nagel’s art – the key theme that his contemporaries adopted, and an intrinsic theme that stays strong within the retrowave aesthetic.

1969 would see the start to his career, graduating with a Bachelor of Fine Arts degree from California State University. He would later pick up a career in 1971 at ABC-TV, detailing graphics for channel promotions. Arthistoryarchive.com have lorded him as a “Playboy art icon”, as he designed for the popular magazine throughout the mid to late 1970’s, however his place in the history of Retrowave is much more significant, with his art continuing to resonate throughout the New Retro Wave movement.

In the movement, Nagel is an unsung icon, creating works just before the vibrancy of the 90’s, during a time of great expressionism that would segway into the Pop-art era, taking art into an undefined territory. Today, this has made its way into our familiar minds.

There is no denying that Nagel’s art was a massive influence upon the 2015 Comedy Central production Moonbeam city – the show created by Scott Gairdner encapsulates many facets of the movement, through a nostalgic Miami-Vice theme, however the distinctive character illustrations and some of the execution of colour is a direct throw to the art of Nagel. Album covers of our contemporaries often take a trend of throwing back to the art of Nagel, adapting it to further fit the aesthetic. The album cover of ALEX’s 2017 EP Youth takes on a Nagel-ic design, adding colour to the portrayal of the woman, along with greater detail of the hair, with shadow effects. Trevor Something’s “Trevor Something Does Not Exist” in 2014 took a similar artistic direction with its album cover. In another area, the song “Desire – Under your spell” on Youtube has a throw to the art of the era. Popularised by 2011’s Drive, the fan-made music video uses Nagel-like imagery to be synced to the song – although the art is by Roy Lichtenstein, a contemporary of Nagel, synthesising a comic book-esk and pop art-ish aesthetic, the resemblance is noticeable, further cementing in place the impact of Nagel’s contemporaries. Needless to say, Lichtenstein has his own place in artistic history. The synths of the song throw in Nagel’s direction, but let’s not forget his contemporaries. Photo from “Desire – Under Your Spell” (November 22, 2010), on YT Channel The Prismer, art by Roy Lichtenstein

Artists that explored this area as Nagels contemporaries and after Nagel’s untimely death include Carlos Sanchez, Dennis Mukai and Luis Preciado, who each added their own flavour to the artsphere.

“Thrill Me” by Carlos Sanchez “Thrill Me” by Carlos Sanchez It’s likely to say that Patrick Nagel has influenced the artistic direction of the movement greatly, adding mystery, sophistication and enticement that modern contemporaries have taken on board immensely.