At the time Mazda’s advertising slogan was “The more you look, the more you like” and nothing could be closer to the truth with this Mazda. 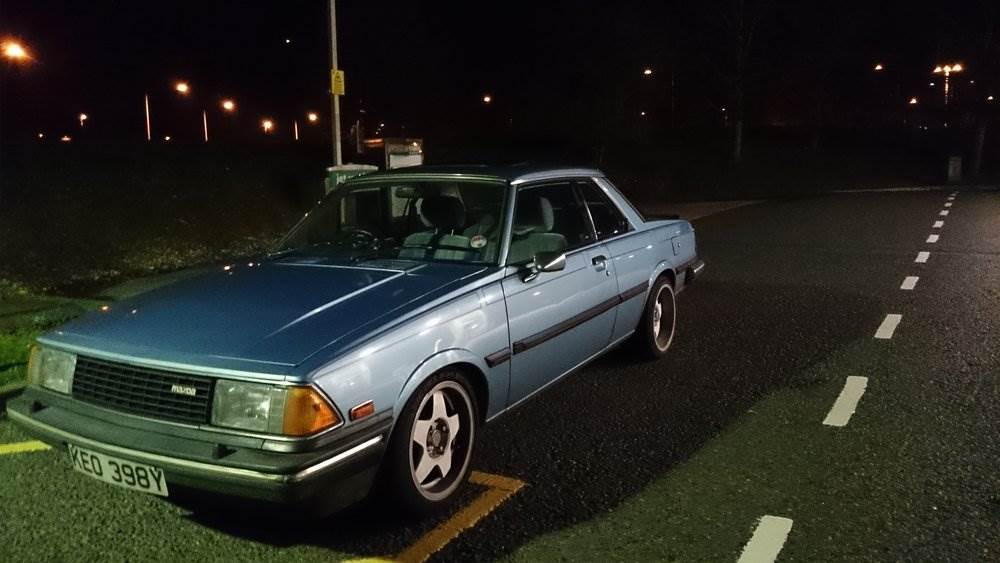 In the movie Kung Fury, Adolf Hitler is reimagined as a time travelling kung fu expert, hell bent on destroying everything that is good. In reality, he was much worse. He approved and commissioned the Volkswagen Beetle. The gutless wheezing, overturned bathtub survived decade after decade against superior vehicles. Countless enthusiasts did all they could to keep the Nazi-mobile going, with custom paint jobs, better engines, even chopping the roof off so you can stand and salute to your people. There are people who like 80’s cars and there are people who are wrong. For me personally, not only for their build quality, the ability to maintain them and the rad styling but the fact driving meant something more back then. Car’s were more often the stars of a show, or an extension of the heroes and characters we loved.  The Duke brothers wouldn’t have been half as cool, out running cops whilst smuggling drugs, had they been hopping fences on foot. Today, regular cars are wheeled out in commercials with anything from gunships to fighter jets, with explosions and computer generated effects, to try and impress you but how disappointed are you are when a car rolls over the horizon resembling a stylish breadbin. My Scriocco was sold but I still had my Kawasaki, so i could take a bit of time choosing my next car. Everyday i set my filters, scrolling through page after page of retro cars. After a week of hard searching on most sale sites, i was about to give up…when my next car suddenly appeared. I’d never seen one of these before and trust me, I could tell you most cars of this era from the headlight alone. Enter, the Mazda 626 ‘Montrose’.

Known to the Japanese market as the Capella, it is more commonly known as the 626, even today. Born originally to compete with the Honda Accord and the Nissan Bluebird, i believe it was superior, just look at it!  My particular model was the Montrose, named in honour of a dealership in Montrose. A rear wheel drive, four cylinder, two litre affair with pillar-less doors, electric windows and blue velor interior.

For some of you readers, this car was perhaps a common sight at one time but on my little island, I don’t think many made it over. As far as I’m aware I had one of only a handful left here in the UK.  When I saw the front end, it reminded me of a retro cop car you’d see in a foreign movie, executing a massive power slide whilst chasing a guy on a dirt bike or something. As far as I can tell, we missed out on many of the great 80’s cars for a multitude of reasons. We’re on an island for one, It’s always raining, so expect rust, and lastly, the French were overrunning us with their farm vehicles. So, with the most important issues addressed, I promptly organised a trip to go and throw money at the man selling it. I boarded the train and with some time to kill, i ran some searches for parts on my phone. Thankfully, a lot of the service parts were still available. Being such a simple machine meant no electronics to fry and most things were accessible with a standard tool kit. As for body work and such like, i’d have more luck finding Bigfoot. I love rare metal and this car was definitely going to require some TLC to keep her running.

I arrived on time and met the guy selling the car at his house, admittedly the car had some work done to it already but that wasn’t a bad thing. The seller wasn’t the guy who partially restored it. The story goes that the old guy who had owned this for quite some time, sadly passed away. The old Mazda was pulled out of storage and was looking suitably tired. A mechanic came to the rescue, bought the car and set to work on the engine first. Valve clearances, timing, plugs, oil, filters etc. He removed the old Mazda wheels quicker than a prom dress and, in my own opinion, i loved his five spoke replacements. I sat in the car with the seller, it was obvious the interior hadn’t had such special treatment, the old boy was obviously a smoker, a deep musty tobacco aged smell rose from the cloth.  To start the car, the guy turned and reached behind me, pressing a fuel pump button hidden in the carpet (another addition from the mechanic). With the fuel primed, he turned the key and she purred into life. The engine, once warmed ticked over very nicely, no smoke, no knocks…I couldn’t get over the styling of the car, i was so happy it ran well. We took a little tour around the block and the car certainly turned some heads, when we arrived back where we left off, I reached into my pocket and gladly handed over the cash. I was understandably nervous during the trip home, this car was older than me and i had absolutely no history on paper, only the story that was told by the car itself. There was no overheating, no electrical fires, nothing fell off, nothing. The solid retro steering wheel felt good in my hands, the recirculating ball steering system was a welcomed addition after many thousands of miles in my VW. The gearbox was solid and precise, like something you’d pull out of something exotic, Italian maybe. The two litre engine was certainly enough and the sound of the carburettor and aftermarket airfilter sang a great tune. At the time Mazda’s advertising slogan was “The more you look, the more you like” and nothing could be closer to the truth with this Mazda. I didn’t do much with car apart from maintain it and clean it up inside and out, bringing out the lovely light blue velour cloth and matching blue carpet. I really felt a coastal theme coming on due to the cars popular locations around the globe and decided to stick a hula girl on the dash to keep me company…this was also a nod to my favorite game at the time, Far Cry 3, set in the islands between the Indian and Pacific oceans. Driving the Mazda was so much fun through the summers, with the windows down and the cool air circulating around the interior. Everything was just right, from the placement of the high quality switches and dials, to the seats which sat on bed springs. The car drives faultlessly and it was also my first introduction to rear wheel drive. I never got into any real trouble with it because there was only just enough power but it was nice spinning up the correct wheels out of a corner or driveway. The Mazda was eventually sold to a loving enthusiast who certainly wouldn’t be taking it through the harsh British winters but will garage it and restore it fully, eventually. I was sad to see her go but content in the knowledge this rare automobile from Hiroshima Japan will live on.

Thanks for reading and now enjoy a short video i made of the 626.