A hot new car from Volkswagen. As fast and powerful as the desert wind it's named after." A Volkswagen brochure for the second generation Scirocco states: "Named after a fierce desert wind, the Scirocco's front wheel drive and transverse engine contribute to its tracking ability 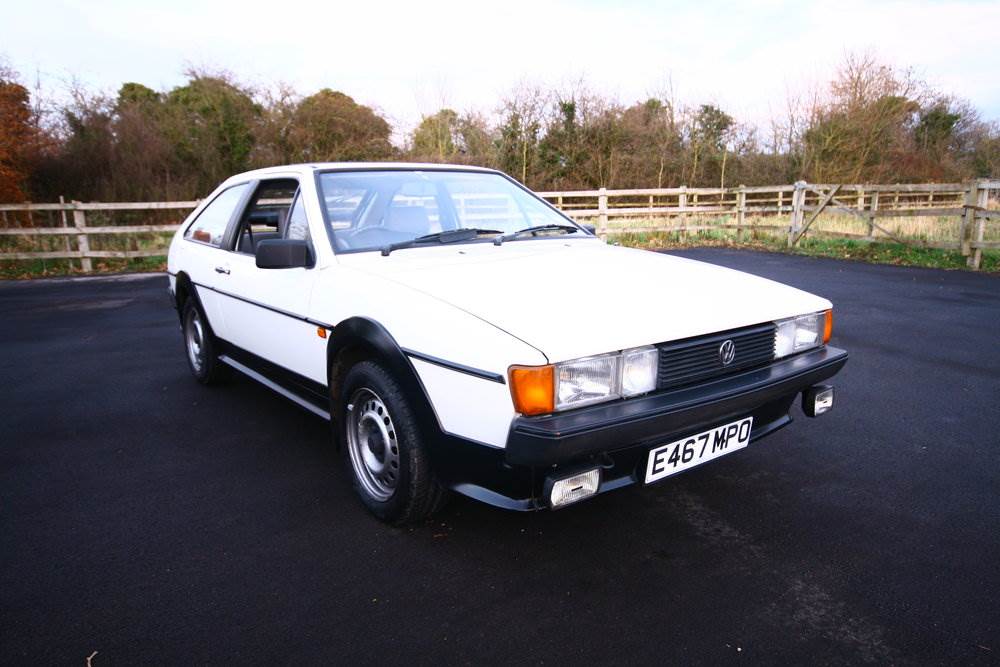 Hi fans of NRW!
Today and for the foreseeable retro future, I have been given the auspicious task of bringing you some retro car delights once a month. The team at NRW accepted my submission and deemed me fit for the bill, so let me elaborate.

Born November in the year 1983, myself, like many other children of the greatest era of all time, spent countless hours perched in front of a twenty something inch CRT television and watched in awe as David Hasselhoff ran over bad guys in a talking Pontiac Trans AM, wearing a pink shirt, medallion and flared trousers. We watched in amazement as B.A Baracus handbrake turned around state troopers in a V8 day wagon, carrying mentally disturbed soldiers of fortune. Jessie Mach caught some serious air on his lethal 300mph turbo bike and well, the rest is history.
I’ve never really owned a car less than thirty years old in the decade of driving so far. Restoring and maintaining my own cars, (namely through lack of funds) because I’m passionate about keeping these machines and the era alive.

So stick on some synthwave, grab a can of your favourite soda and come join me in discovering and learning all about why we love this rare metal from the 1980’s. Being that in the UK the legal age to drive is seventeen, I reached this milestone in the new millennium. So I had some catching up to do. But before all of this, I had been riding motorcycles around for at least a decade. As a youngster I witnessed John Conner escaping the clutches of the evil T1000, listening to guns and roses on a Honda CR in Terminator 2 Judgement Day. I knew from that moment, I needed wheels, just in case robots with knives for arms try to take over the world. Of course.

After completing the riding missions required to obtain a licence, I rode dirt bikes on the road almost everyday for many years. The sweet smell of two stroke in the air always takes me back. Eventually though the winters here in the UK made me reconsider two wheels and acquire four. Enter, my first car. Buying an 80’s Volkswagen Scirocco after the year 2000 is like whipping out an abacus in a class of calculators. On paper it’s design is pretty rad looking but in reality it’s a pedestrian nightmare. Shaped perfectly to injury anything, even at low speeds, almost all of it is steel and everything is ‘edgy’. With aerodynamics akin to something you’d find on the battlefield, it was no Ferrari but what it lacked in aerophysics, it made up for in character.

To quote from Wikipedia;
“A hot new car from Volkswagen. As fast and powerful as the desert wind it’s named after.” A Volkswagen brochure for the second generation Scirocco states: “Named after a fierce desert wind, the Scirocco’s front wheel drive and transverse engine contribute to its tracking ability at all speeds.” At the time I still had a motorcycle, a Kawasaki Ninja…so I was looking for something cheap, cool and reliable. After searching high and low for the newest car for least amount of money, my heart skipped a beat when I laid eyes once again on the Scirocco. Trawling through countless modern city cars was fairly depressing. The Scirocco was a distant memory for me when my dad had a choice between that and the Vauxhall Cavalier SRI. I loved both but in the end he bought the Vauxhall, as it had four doors and better visibility.

I paid £480 for the Volkswagen, by today’s money here in England that’ll get you a loaf of bread and a pint of milk.

The Scirocco was redesigned in the early 80’s after being released in 1974, as the must have sports hatchback. It had already had countless packages and colour schemes, being that it was sold in Europe, Asia and the USA. Big bumpers, chrome bumpers, side skirts, speed stripes and more.
To me it always looked like a compact Delorean and there’s actually a valid reason for that. The man who has touched many automotive designs over the course of recent history is Giogetto Giugiaro. The Giugiaro legend needs recognition at this point. If there is a man who thinks he has more reason to have his face on a bank note, I’d like to meet him and tell him he’s wrong.
Remember that Seiko watch that Ripley wears in Alien? No, you don’t but Giugiaro does because he designed it. Ferrari, Lamborghini, BMW, not forgetting pretty much every Volkswagon that meant something in the 70’s. From cars to firearms, camera bodies to timepieces, this living etch-a-sketch has taught many of us how to do cool. It was only a few years ago that he retired, leaving in his wake, timeless images and innovations that continue to influence and inspire us lovers of radical design.

Returning to my humble white Scirocco, it had a 1.6L carbureted engine, the four cylinders were certainly enough to make good progress and the long fifth gear (labelled ‘E’ for economy I think) was really useful for motorway mileage.
I needed comfy and this little VW was built for just that. The build quality of the car overall was great, simple to work on, easy to drive…ok so it has no power steering but that is a great workout! (As Arnie would say). Sure, the brakes would probably spook an ex Nam vet but this car isn’t about speed, it’s about style and function of design. Once i got my head around the basics of maintenance, i set about removing and replacing all of the speakers, which had pretty much turned into something resembling brown baking parchment by this time.
Cruising in a Scirocco with period correct tracks blasting out, was a dream come true. Michael Jackson, Phil Collins, Martika, Dire Straits…all of which complemented the drive, the cheap electronics and musty retro aroma from the interior.

I spent a long time in those pinstriped cloth seats. When i bought the car, she had travelled 82,000 miles (130,000Km) since 1988 and I almost doubled this mileage by the time i sold it on. If you’re an enthusiast like me and even for most first time drivers, your first car will always bring you some joy and some headaches but ultimately it’s what gave you some real freedom.
No one cares if you own a new Scirocco but if you drive a retro model, other retro VW owners will wave or give you the thumbs up. Strangers will come and tell you that their uncle had one or that they had one when they were ‘cool’. At that point the correct response is “Wrong stranger, it’s STILL cool!”

Be sure to keep an eye out for the next instalment, where I will be recounting the purchase of my second car which was as rare as hens teeth and cooler than a kid with a Nintendo Power Glove.