“Planet Earth, 1980s C.E., a miraculous tune swallowed every other sound on earth, transcending time from East to West. It was the sound of the Japanese idol. The essence of the idol sound long thought extinct has achieved its own evolution within the legendary satellite, 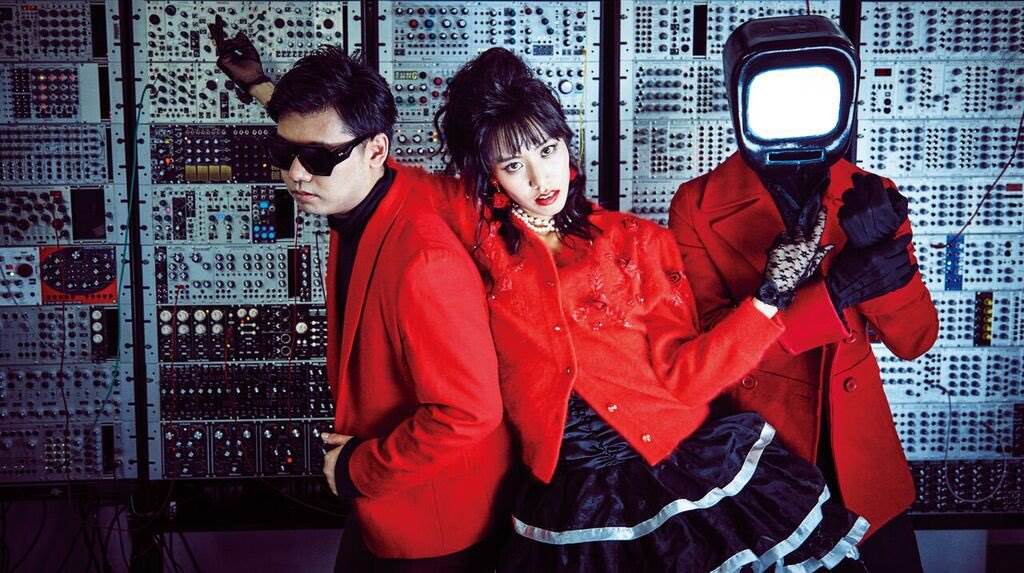 “Planet Earth, 1980s C.E., a miraculous tune swallowed every other sound on earth, transcending time from East to West. It was the sound of the Japanese idol. The essence of the idol sound long thought extinct has achieved its own evolution within the legendary satellite, Satellite Young, which only appears once in 30 years…”

Following this epic introduction, like the opening of a cosmic time capsule, lead singer Emi Kusano took the stage to join her bandmates Bellemaison Seikine and the ever-mysterious Tele Hideo to perform their very first U.S. shows at SXSW in Austin, Texas. Beginning with a short rendition of “Jack Doushi” before switching to “Break! Break! Tic! Tac!”, they grabbed the audience’s full attention through their catchy retro J-Synth tunes and fun visuals. Emi Kusano’s strong vocals paired with her iconic look of retro styled hair and a red outfit hearkening to the idol days of mid to late 1980s Japan created a stage presence unparalleled. The song “Break! Break! Tic! Tac!” included hand motions that the crowd quickly imitated and Emi even came down into the crowd to dance and sing with us for a chorus. Constantly dancing and engaging with the crowd, she never stood still except to take a drink from a shiny, retro-futuristic “Disco Pineapple Sipper Cup.”

Bellemaison in his neon glowing glasses kept the music going through the approximately half hour set, which included a new song “Sanfransokyo Girl” from their upcoming album and their collaboration with legend Mitch Murder on “Sniper Rouge”.

Tele Hideo made the show visually extravagant by running projected visuals from a computer and through the use of numerous props, including its own light-up TV head. Tele Hideo dazzled the crowd with a light “ray gun”, a large handheld bubble blower, hand lights, and an expandable ball with lights, all contributing to making this one of the most visually intriguing shows I saw at SXSW this year. After seeing Satellite Young perform three electrifying shows at SXSW this year, I must say that despite the numerous incredible music options SXSW has to offer, my time as a music fan could not have been better spent. It was nostalgic and retro, but very much fresh and unique. The next time the “satellite” appears, be ready for the ultimate J-Synth experience with Satellite Young.

> Where did the name Satellite Young come from?
Emi: Belle and I randomly selected words that sound both retro and futuristic at the same time. Satellite Young actually has no meaning. > Can you describe your sound and what inspired it?
Belle: Satellite Young’s sound is an assembly from Japan’s 80s popular song, synth pop, and modern synth wave, especially “The 9th Wave” by Seiko Matsuda, which is a very influential Japanese synth pop masterpiece.

In early childhood, I listened to Journey and Jan Hammer, and recently I have been paying attention to the sound of 80s Madonna and the R & B sound of 80s MCA artists such as Pebbles and The Jets.

In current synth wave, my favorite artists are Mitch Murder [who collaborated on “Sniper Rouge”], SelloRekt / LA Dreams, Sunglasses Kid, and The Midnight.

Emi: When I was in second grade (late 1990 ‘s and 2000’ s), I always borrowed CDs from the 70 ‘s to 80’ s in the library. Beginning with Pink Lady, I heard Yoko Minamino, Minako Honda, Shizuka Kudo and also Madonna, Cyndi Lauper and Kylie Minogue. > What can you tell us about your upcoming album?
Belle: It became an album filled with all the songs of Satellite Young so far.
From the aspect of sound, I think that it was possible to cut out the universal charm of Japanese 80s songs from various angles and present them as “new things”.
I have done sound design with the goal of evolving Japanese 80s songs contemporarily, not just replicating them.
New Retro Wave also introduced “J – Synth”, but it is genuine, the world ‘s first Japanese Synthwave album.
And, although it may be hard to communicate with listeners abroad, our music is really adhering to lyrics!

> What more can we expect from Satellite Young?
Belle: We would like to release more videos and I would like to use more visuals from now on.
We do not want the audience just to listen to the music, but also want them to be immersed in the worldview we are creating. It is like when watching a movie like “Blade Runner” or going to a theme park in “Akira” world.

Even in the production of live music, I want to make the worldview more apparent. That is a future task. Concerts using VR is also a good idea.

> What do you use to create your music? Primarily soft synths or hardware?
Belle: Although it may be surprising, totally software. I use Logic 9 as a main DAW.
My favorite soft synths are Arturia V series, Waldorf PPG Wave 2.V, and some of UVI vintage series. Also, UAD2 is indispensable for our music production. I use SSL channel strip plugin & G Series Bus compressor on almost every track. These plugins make sound vivid; it’s “80s” magic.

> Who or what inspired your look?
Emi: Of course, my look has been reproduced from a lot of Japanese idol references in the 1980s, but from now on I would like to aim for fashion that makes me feel like I am from a fictional future like Neo Tokyo.

> How was your first U.S. performance? Any chance of a tour outside Japan? Where would you love to perform?
Emi: American audiences know how to party harder! So I had such a blast. It was in a sense that each person and I became one.
We also want to perform in various parts of the world. Probably Europe? Or Southeast Asia would be enjoyable, too.
Please invite us to play!!!!