There is no denying that I would enter a vapid land of infertile thought and mundane repetitiveness, were I to elaborate on a well-known fact that out of a countless plethora of books, some are considered rare because of their bewildering exactitude and profundity, while 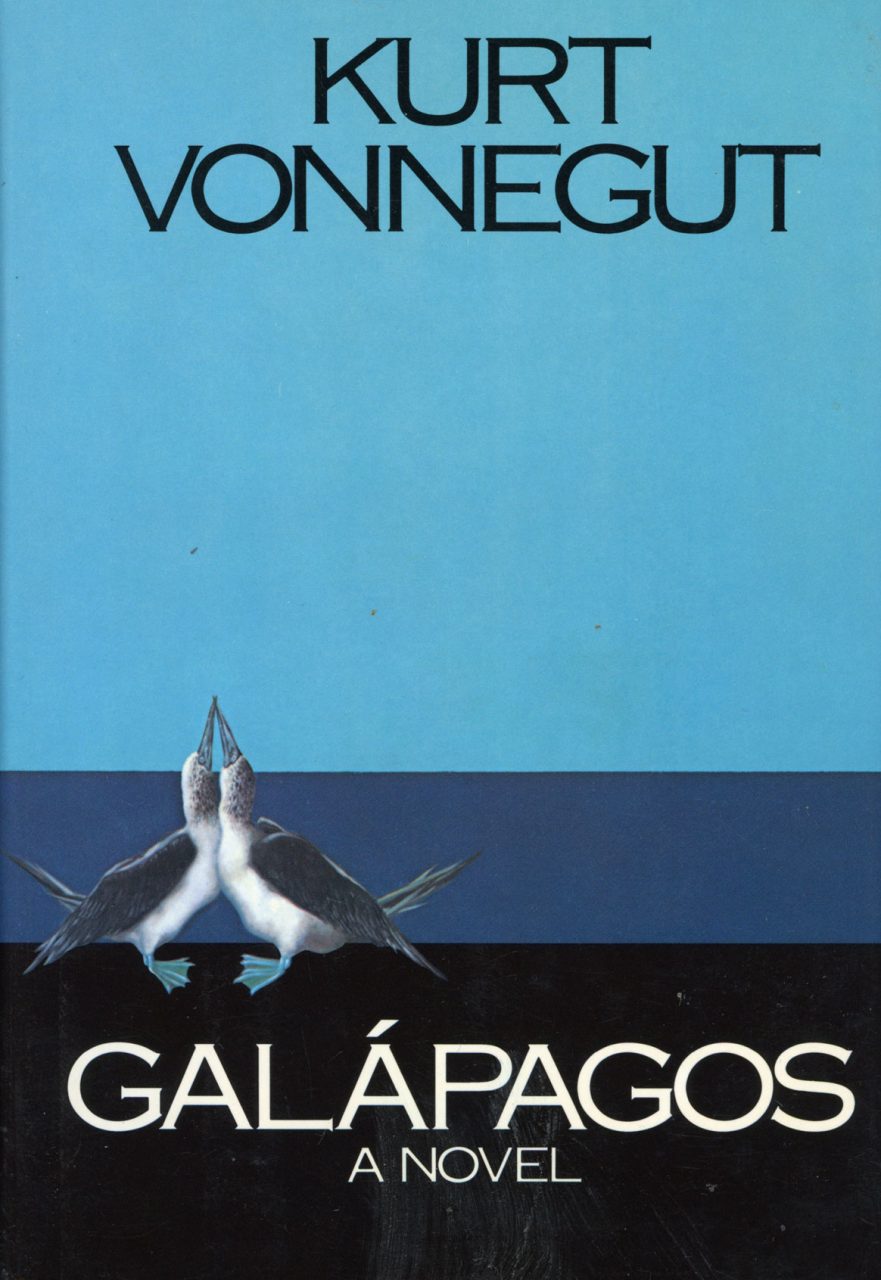 There is no denying that I would enter a vapid land of infertile thought and mundane repetitiveness, were I to elaborate on a well-known fact that out of a countless plethora of books, some are considered rare because of their bewildering exactitude and profundity, while some others, also being an infrequent treat, are like kids playing hopscotch – flawlessly carefree and genuinely unpretentious. However, this obviousness ends rather abruptly when the profundity breeds cement shoes of repulsion and the unpretentiousness gets lost in a distorted mirror image of itself – naivety. Nevertheless, we should not feel abused by these truly disheartening phenomena whatsoever simply because a third, very intermediate type of book might always come in handy as a ‘savior’, who casts off a whiff of disappointment reeking from the previous two. The transitional state of such ‘redeeming’ novels comes from a specific quality which makes them invulnerable to the aforesaid corrosion. Galápagos is surely one of them. But how did it acquire its exceptional ‘stainlessness’ and what are its traits – answering these questions is a quest which awaits the following text.

Galápagos can be regarded, with a slight overuse of oxymora, as a stoic outcry of calm exasperation, how typical of Vonnegut and other authors being thoroughly disillusioned yet somehow still deeply stirred up by a questionable moral constitution of humanity and its probable as well as unforeseeable transformation in the near or far future. Being a twisted blend of dystopian fiction and a clear-cut satire, the book presents a story of an impending end of human race as we know it. Narrated from an incredibly amusing, subjectively omnipresent point of view, which provides another delivery of paradoxical expressions to our humble collection, it follows the retrospective vivisection of accidental events, which resulted in stranding a totally mismatched menagerie of characters on a fictional, northernmost island of the titular Galápagos archipelago – Santa Rosalia. We find among them: an admiral in the Ecuadorian Naval Reserve, who is an all-fingers-and-thumbs socialite of German descent and a sheer figurehead as regards even basic sailing skills, a recently widowed, middle-aged, high school teacher of biology, a blind daughter of a well-off financier – a genuine cross-breed between Gordon Gekko and Steve Fossett, a pregnant wife of a Japanese IT genius and six girls of a cannibalistic Kanka-bono tribe from the Ecuadorian rainforest. By the utterly contingent chain of events, the above motley crew sets sail from Guayaquil’s waterfront amidst the freshly erupted mayhem of the imminent apocalypse.

I am having this dubious sensation right now that Vonnegut – one of the most effortless evokers of the severely depleted supply of common sense ‘stored’ inside the homo sapiens species – might have actually written a perfectly distorted parable. As we are being amused by author’s bitter-sweet, fact-like prose loaded with some gallows humor of the most exquisite quality, we suddenly realize that the funky bunch of our modern Robinsons-to-be, gathered on the “Bahía de Darwin” passenger ship, cannot be actually treated as, in this particular case, the aggregate protagonist at all. It simply could not be one, due to the overbearing power of fatalism sticking out its impish head from behind the text itself. Its influence on the reader seems to be irrevocable to such a great extent, that we are barely able to see the embodiment of the ‘antagonist’ too, namely “the big brains of humans”, ‘whose’ destructive force, an unfortunate result of a superfluous intellectual flexibility homo sapiens has been cursed with, has the earmarks of something absolutely detached from the humans themselves, a thing exterior, almost alien and, what is even more puzzling, completely marginal. This perplexing impression of the ultimate fatalism (maybe the term “catastrophism” would do even better here), emerging as an eerie toss-up between blind chance and fate, is the only element of parable left in the strictly ‘anti-parable-ish’ microcosm of Galápagos. Or is it?

As a matter of fact, it is not. There is another factor, which could be deemed not only an ‘elongated’ moral, appearing gradually as an antithesis of the mischievously predetermined ‘fabric’ of the book, but also something which calls into question my sudden supposition (maybe Galápagos hasn’t been soaking in a marinade of antiparable for that long after all?…). Sprouting probably straight from Vonnegut’s bona fide steadfastness against mindlessness and hopelessness the earthlings have been following and causing throughout their career as the Rulers of the World, it may have something in common with an… optimism! Yes, indeed, the optimism – however ridiculous it may sound, for the prose of our Pall Mall-loving author does not necessarily leave you grinning from ear to ear in a straightforward manner; it’s more like a laughter through tears – which is being hinted along the tale and quite often reassures us that a certain type of redemption always awaits the human race. And it doesn’t matter, whether it turns out to be a result of tossing a coin called “Fate” (another oxymoron to our catalog!) or if it comes from the law of natural selection, which finally does justice and straightens things out a little for the remainder of humanity or, better yet, streamlines it here and there. I cannot restrain myself from listening to the promptings of my oversized brain, which keeps telling me to give my own proposition of the moral. So I say: thank goodness for a devolution! Wait a minute!? Do I hear a squawk of a great frigate bird resembling a laughter?…

In the first paragraph I stated that Galápagos belongs to the intermediate group of novels, which are immune to ‘genetic’ deformations and mutations of those overly thorough(bred) as well as mongrel-ishly happy-go-lucky. I suppose the secret of Vonnegut’s ‘stainlessness’ lies in the qualities of the crooked parable pinned down on an ad hoc basis: the anti-exemplary protagonist, the distilled, almost nominal antagonist, the overgrown, highly imperative fatalism and the moral, which is definitely present, although mercilessly elusive. After all what can one possibly say or write when there has already been said and written almost everything about the self-destructive force of human stupidity? Quoth Beckett: The fact is, it seems, that the most you can hope is to be a little less, in the end, the creature you were in the beginning, and the middle. That’s probably why Vonnegut, I presume, is e.g. dropping sloppy hints of what will the typical specimen of homo (still?) sapiens look like in one million years. Nonetheless, all of this can always be proven wrong (another caprice of the oversized human brain – doubts). Therefore I am leaving the task of dotting the ‘i’s and crossing the ‘t’s up to you and your much less misleading gut instinct. Just remember not to trust your oversized brains too much! They tend to get rusty and, after all, little do we know about how they really work, don’t we?