"I just stumbled upon this entertaining gem from the depths of the surface web. Akira meets The Simpsons. Let's go!" 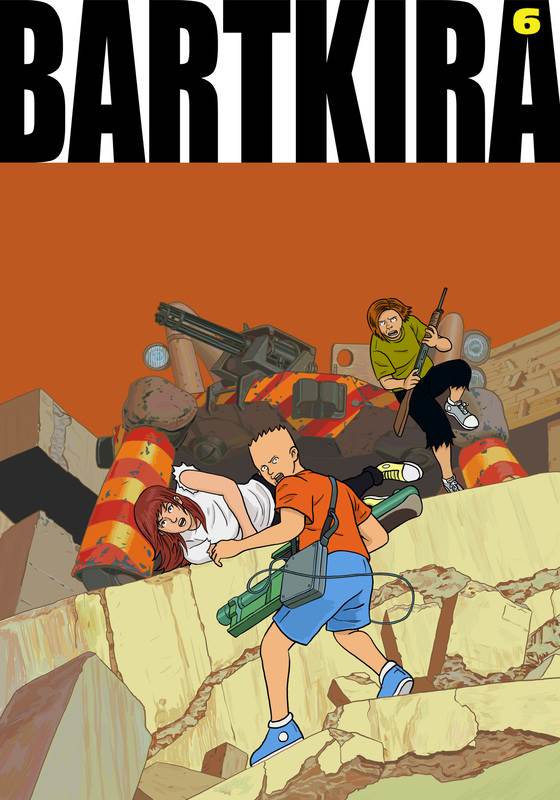 “I just stumbled upon this entertaining gem from the depths of the surface web. Akira meets The Simpsons. Let’s go!”
– SamHaiNe

(The following text was taken directly from bartkira.com)

What is Bartkira?
Bartkira is a community art project in which hundreds of artists from all over the world are collaborating to recreate all six volumes of Akira, replacing all the characters with the cast of the Simpsons.

Why is Bartkira?
A: Here’s the story. My friend Ryan Humphrey drew some simple, beautiful drawings of The Simpsons acting out scenes from Akira and put them on the internet under the title “Bartkira” . I loved it immediately. I’d organised a few collaborative projects before and… I just decided to push Ryan’s Bartkira snowball down a hill and see how big it would get. Neither of us thought it would grow into the colossus it has. We didn’t expect to see a Bartkira gallery show, or to be turning down offers from dodgy publishers left and right, or for a guy to make a custom Bartkira leather jacket or for another person to get a Bartkira tattoo- and we never expected the incredible amount of beautiful artwork we continue to receive. We’ve tried to answer the question “why?” in countless interviews and seem to give a different answer every time- all we know is we’re really happy so many people have been inspired by this project.

Q: Is this legal?
A: We’re not sure. We kind of just leapt into it. To be on the safe side, we’re keeping Bartkira as an entirely non-profit operation and we’re giving all the proceeds from sales of books, shirts and so on to charity. If you’ve made merchandise from your Bartkira artwork, we encourage you to do the same. We suspect the project occupies a legal grey area protected by parody laws. Regardless, as of writing we’re a year in and we haven’t received our cease-and-desist yet.

What do Katsuhiro Otomo and Matt Groening think of Bartkira?
A: A source close to Otomo told us that he saw it, laughed and… he got on with his life. Meanwhile, we’re told his son Shohei loved it. That’s generally the reaction- people either love it or they don’t get it and they move on. Needless to say, if the Otomos had  wanted us to stop we would have. As for Matt Groening, we’ve so far been unable to get in touch with him- but it’s well documented that he’s an avid collector of bootleg Simpsons merchandise, so we reckon he’d dig what we’re all doing here. I also suspect The Simpsons’ own tribute to Hayao Miyazaki in January, 2014 might have been inspired by the Bartkira project. The timing seems right, anyway. Anyway, we’d love to hear from him.