Anyone that knows me will tell you that I am a big mark for South Korean cinema. And I don’t mean only because of OLDBOY. 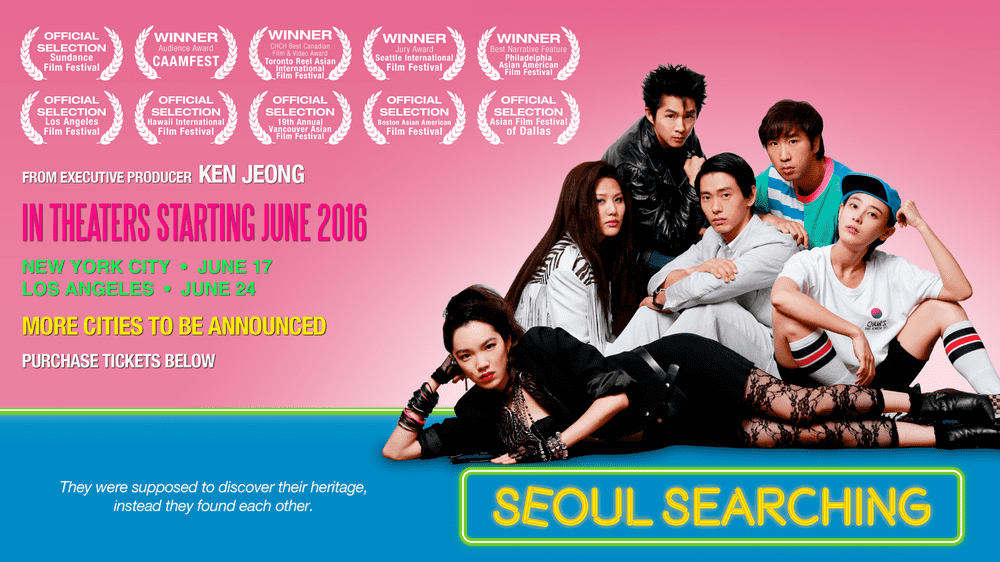 Anyone that knows me will tell you that I am a big mark for South Korean cinema. And I don’t mean only because of OLDBOY.

Korean cinema has contributed some of the grittiest and most thrilling Neo-noirs, action and horror movies we’ve seen since the golden era of 70’s-80’s Hollywood. Films like Na Hong-jin’s The Chaser, The Yellow Sea and 2016’s The Wailing; Kim Jee-woon’s A Bittersweet Life and I Saw the Devil; and Park Chan-wook’s Vengeance Trilogy, Thirst, Stoker, Snowpiercer and the upcoming The Handmaiden(2016). They’ve even redefined what you can achieve with animated features (in my opinion) after viewing Yeon Sang-ho’s The King of Pigs and The Fake.

So when I after viewing the trailer for Seoul Searching and discovering that a local theater was hosting screenings, I was all in. A South Korean teenage romantic comedy was too much of a possible good time that I had to go see for myself. And it was an uplifting good old fashioned retro fun time. The film is directed by Benson Lee and premiered as an official selection at the 2015 Sundance Film Festival. Taking place in 1986, the story follows a group of Korean High Schoolers from different countries participating in a government sponsored summer program to learn about their Korean heritage and culture.

The reason for so many Korean youth being scattered around the globe is a result of the post Korean War turmoil that forced out hundreds of families to other countries; escape poverty and civil war. According to the beginning narration, the summer program was discontinued by the government due to the difficulties of teaching Korean values on young people who have already assimilated to western cultures.

Seoul Searching is everything you loved about classic John Hughes films and all those teenage summer comedies from the 80’s like Summer Rental, One Crazy Summer, Meatballs, Porky’s, The Wild Life, Fraternity Vacation and all those like them. It shows an authentic look at teenage life, insecurities and juvenile pursuits of a good time. The characters are all fleshed out and relatable. The humor is on point and jovial.

The key word is “innocence”. Seoul Searching reminded me of a time when I was actually innocent and unjaded; the point when my teenage life was ending and the unknown realities of adulthood were approaching. It reminded me about my friendships and all the hijinks we got into at that age. The sneaking around into the girl’s dormitory, smuggling cigarettes and alcohol and late night reconnaissance missions into night clubs and bars.

But don’t think this film is just laughs. There is some real sincere heart here. Each character goes on their individual arcs and each individual feels real and you feel it with them. There were points in the film where I heard audience members actually crying. And you know what I teared up too at some scenes. It’s a well shot, well written piece of art about growing up that had me feeling for the characters and I wanted more. I wanted to see more of what they did during that summer. And when it was over, the only thing I wanted was for them to keep in touch with each other and remain friends. Yeah, it got to me. I laughed, I teared up and I felt good about it. Oh, did I mention that the soundtrack is fantastic. Every song fits its scene and gives you a nice kick to your retro-heart strings.

I’m not kidding. This movie was a joy to watch and I’d watch it again if I can. I’d buy it if I can find it. It’s that good and I know you all will love it too.

Check your local theaters and search on fandango or the internet for theaters screening Seoul Searching [www.seoulsearchingthemovie.com] and go see it. Love it.

Stay fresh, stay classy and keep your fingers on that rewind button.