While in preparation for the outlining of a new mixtape, I decided to sit down and reflect on why I love retro-cyberpunk. 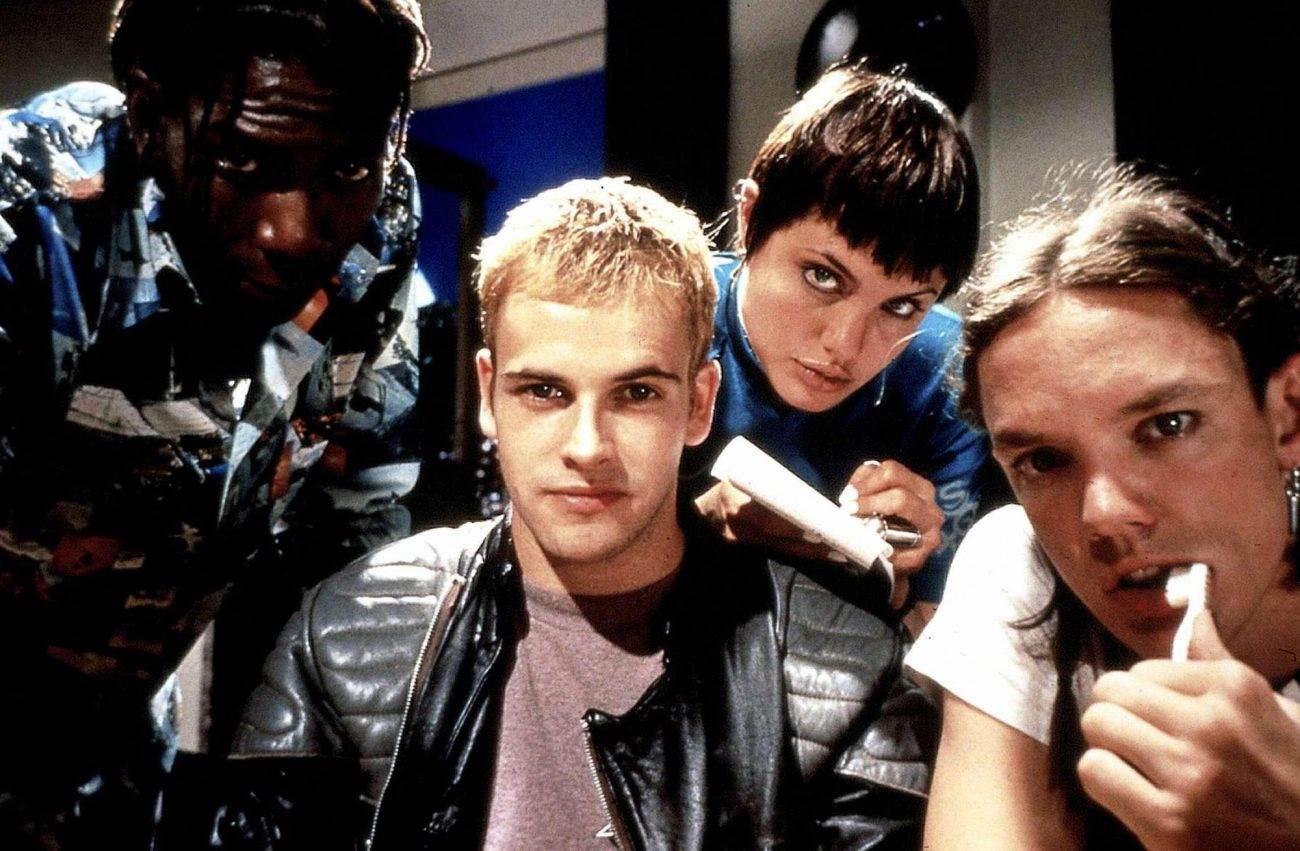 “The sky above the port was the color of television, tuned to a dead channel.”
― William Gibson, Neuromancer

While in preparation for the outlining of a new mixtape, I decided to sit down and reflect on why I love retro-cyberpunk.

The dystopian urban environments of the nineteen eighties mutated our expectations for the future, a stark contrast to the sundrenched optimism of the nineteen fifties. Instead of blue skies and robotic maids, it was grey mornings of smog and pollution, rising tides and congested cities collaged with multi-culturalism. Much of what we have now was envisioned however, reality is more streamlined than fantasy. Fantasy was gritty and dark and noir. Analog screens and cables scattered all over the place. Information is god and exchanged over vast distances via satellite dishes and worth more than currency. People living longer and resources dwindling; it’s the time of genetically modified food and designer body mods. Any wish you will and it can be yours.

Cyberpunk: “a subgenre of science fiction in a future setting, noted for its focus on “high tech and low life” aspects of society. It features advanced technology and science, such as information technology and cybernetics, coupled with a degree of breakdown or radical change in the social order. Cyberpunk plots often center on a conflict among artificial intelligences, and megacorporations, and tend to be set in a future Earth, rather than the far-future settings or galactic vistas found in novels such as Isaac Asimov’s Foundation or Frank Herbert’s Dune. The settings are usually post-industrial dystopias but tend to be marked by extraordinary cultural ferment and the use of technology in ways never anticipated by its creators (“the street finds its own uses for things”). Much of the genre’s atmosphere echoes film noir, and written works in the genre often use techniques from detective fiction.” – Wikipedia

Who started it? Was it William Gibson’s Neuromancer? Was it 1982’s Blade Runner? Was it the paranoia of a society’s growing dependence on technology? Who knows and who cares. It’s here. Not in a homage kind of way – for real. Our modern living is the low life High Tech fiction of yesterday. Although a lot glossier and wireless but, here nonetheless.

Corporations are dictating political tug of wars. Natural resources are being privatized and sold back at record high prices. Cities of industry like Detroit are collapsing under the weight of the new century’s burdens. Urban areas are becoming overcrowded and homogenized with trend and swag cultures. Rural areas are becoming obsolete in the eyes of the average consuming American who chooses to step up the ladder and live in ratholes and work jobs they don’t like to buy things they don’t need in a new habitat they resent but, need to have status – “Choose Life. Choose a job. Choose a career. Choose a family. Choose a fucking big television, choose washing machines, cars, compact disc players and electrical tin openers. Choose good health, low cholesterol, and dental insurance. Choose fixed interest mortgage repayments. Choose a starter home. Choose your friends. Choose leisurewear and matching luggage. Choose a three-piece suit on hire purchase in a range of fucking fabrics”- Trainspotting by Irvine Welsch.

Military power is becoming more and more advanced like a techno-addict. Soon, the modern soldier will rely more on machines than his own wits and resolve; working side by side with drone infantry and remote control aerial support. If it ain’t bought, sold, marketed, reprinted, rebooted or whatever then you’re not in the right place. We are teetering toward the noir worlds of William Gibson, Ridley Scott, Masamune Shirow, Mamoru Oshii, exc. My only regret is that I won’t be a young man when we realize we’re in Night City. Neuromancer is the 1984 novel by William Gibson, a seminal work in the cyberpunk genre and the first winner of the science-fiction “triple crown” of the Nebula Award, the Philip K. Dick Award, and the Hugo Award. It was Gibson’s debut novel and the beginning of the Sprawl trilogy. The novel tells the story of a washed-up computer hacker hired by a mysterious employer to pull off the ultimate hack. Neuromancer is considered “the archetypal cyberpunk work”.

Blade Runner is the 1982 Neo-Noir Cyberpunk film directed by Ridley Scott, and starring Harrison Ford, Rutger Hauer, Sean Young, and Edward James Olmos. The screenplay, written by Hampton Fancher and David Peoples, is a modified film adaptation of the 1968 novel Do Androids Dream of Electric Sheep? by Philip K. Dick. Blade Runner follows the parallel stories of a blade runner being forced out of retirement to hunt down three replicants (life like androids) who have escaped a mining colony and follows the surviving replicants as they desperately try to find a way to prolong their dwindling life spans by tracing their creation back to the source at the Tyrell Corporation; Leading to the emotional crescendo of an ending. The soundtrack was composed by Vangelis and stands the test of time in visual effects and significance in film history. It’s better than Star Wars. RoboCop is a 1987 American cyberpunk action film directed by Paul Verhoeven and written by Edward Neumeier and Michael Miner. The film stars Peter Weller, Nancy Allen, Dan O’Herlihy, Kurtwood Smith, Miguel Ferrer, and Ronny Cox. Set in a crime-ridden Detroit, Michigan, in the near future, RoboCop centers on police officer Alex Murphy (Weller) who is brutally murdered by a gang of criminals and subsequently revived by the megacorporation Omni Consumer Products (OCP) as a superhuman cyborg law enforcer known as “RoboCop”. Cyberpunk, mainly known by its second edition title Cyberpunk 2020, is a cyberpunk role-playing game written by Mike Pondsmith and published by R. Talsorian Games in 1988. The third edition, published by R. Talsorian Games in 2005, is referred to as Cyberpunk V3.0 and is set in the same fictional timeline of all the former editions, but during the fictional 2030s. Cyberpunk 2020, as the name implies, takes place in the year 2020. The game’s default setting is the fictional Night City, an arcology on the west coast of the United States located between Los Angeles and San Francisco. The game mechanics are similar to D&D although leaning heavily towards technology and cybernetics, rather than magic. CD Projekt RED, the developers of The Witcher series, announced on their 2012 Summer Conference that they were working on a non-linear RPG based on Cyberpunk 2020. The game is now known as Cyberpunk 2077. Shadowrun is a science fantasy tabletop role-playing game set in a near-future fictional universe in which cybernetics, magic and fantasy creatures co-exist. It combines genres of cyberpunk, urban fantasy and crime, with occasional elements of conspiracy fiction, horror and detective fiction. From its inception in 1989, Shadowrun has remained among the most popular role-playing games. It has spawned a vast franchise that includes a series of novels, a collectible card game, two miniature-based tabletop wargames, and multiple video games. Hardware is a 1990 British-American post-apocalyptic science fiction horror film directed by Richard Stanley and starring Dylan McDermott. Inspired by a short story in 2000 AD, the film depicts the rampage of a self-repairing robot in a post-apocalyptic slum. My second favorite of the genre, after Blade Runner, rich with all the nostalgic aesthetics of true retro cyberpunk: wastelands, layers of endless cables and wires all over, scrappers, gnarly prosthetics and all of those things that made it possible for low budget projects like Cyborg, Fortress, Nemesis to be made to look like the shattered possible future. One of the best soundtracks on this list. Split Second is a 1992 British science fiction film starring Rutger Hauer, Kim Cattrall, and Neil Duncan. The film is directed by Tony Maylam and Ian Sharp. In the year 2008, heavy rainfall has flooded large areas of London. Rookie police officer Dick Durkin (Duncan) is assigned to partner Harley Stone (Hauer), a burnt-out and highly cynical homicide detective who, according to his commanding officer, survives on “anxiety, coffee and chocolate” after being unable to prevent the murder of his partner by a serial killer several years previously. Now however, the murders have begun again and Stone and Durkin are assigned the case. Part Alien, part Blade Runner, part Hardware and a smidge of Manhunter are all rolled up into this film. Highly underrated with a limited theatrical release in the states. Johnny Mnemonic is a 1995 Canadian-American cyberpunk action thriller film starring stars Keanu Reeves, Dina Meyer, Ice-T, Henry Rollins, Takeshi Kitano, Denis Akiyama, Udo Kier and Dolph Lundgren. The film is based on the story of the same name by William Gibson. Keanu Reeves plays the title character, a man with a cybernetic brain implant designed to store information. The film portrays Gibson’s dystopian view of the future with the world dominated by megacorporations and with strong East Asian influences. There are a few honorable mentions but, I’d rather you all just go and indulge in the genre and find some flicks for yourself. Enjoy the scenery of the wastelands and jack into your cyberspace ports via that rewind button.

“I’ve seen things you people wouldn’t believe. Attack ships on fire off the shoulder of Orion. I watched C-beams glitter in the dark near the Tannhauser gate. All those moments will be lost in time… like tears in rain… Time to die.” – BLADE RUNNER (1982)