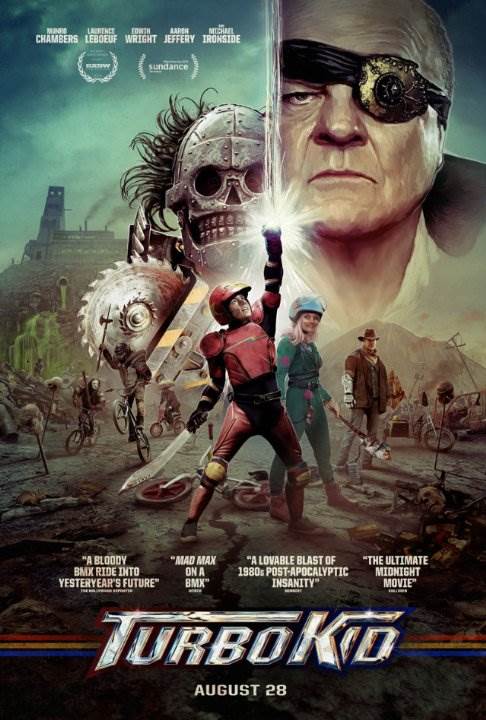 Set in a post-apocalyptic future in the wastelands of, what used to be, America is a civilization on the brink. People barter and trade junk and scrap. Warlords lead gangs of wildling sociopaths. The food is limited and the earth is scorched if not radioactive. And it’s a blessing to watch it all happen.

Young Eli Goldsworthy, I’m sorry. I mean “The Kid”, after the destruction of Degrassi High School and modern civilization is left to his own devices. He is alone in a barren desolate world. His only escape is his imagination and the adventures of Turbo Rider.

The wastelands are ruled by Zeus. Zeus’ minions patrol the lands enforcing his will on their BMX bikes, killing anyone who questions to defy the new order of things. Zeus’s second in command is the cosplay inspiring Skeletron; a circular saw shooting killer with no face and no dialogue invoking the ambiguity of Boba Fett. Our protagonist is an introverted survivor who has a chance meeting with a young woman named Apple who may or may not be sane. They slowly form a very genuine friendship as the film progresses until our young would be hero finds a power gauntlet and a crashed command ship. What follows is blood soaked and caked in violence.

This movie surprised me because I was expecting a drenched rag of nostalgia and joke after joke after joke. But to my surprise this movie actually had some heart and consistency to it. It wasn’t an excuse to throw around dated genre jokes. You actually kind of had to pay attention to it. There was humor but no jokes, which is a good thing. On a scale of personal approval I would place this film closer to the greatness that was Hobo with a Shotgun and farther from Kung Fury. Yes, it’s better than Kung Fury.

The film looks good; a little bit of Cyborg and that film where Rutger Hauer played a cyborg battling other cyborgs mortal combat style. The acting is adequate to the material. Michael Ironside is always fun to watch. But Laurence Leboeuf actually steals majority of the scenes she’s in and serves as the heart of the story and focus of all the emotional struggles that our hero must endure.

The gore is magnificent and rightly erupts on screen at appropriate cues like pyrotechnics at a Great White concert.

The Turbo Kid is fun, it’s sweet and has merit. It may be difficult to find at your local theater if you happen to live somewhere in the boonies. But, I’m sure you can find it on your cable demand channels or online. However, if you can spend a few bucks to see this film you should cuz it’ll be a few bucks well spent on a good hearted film. So go charge your blasters. Ride your bikes into the future. Save your water and precious metals. Store your water. Keep your skulls in your toy chest, ummm… And keep your fingers on that damn Rewind Button.