Yes it is time. Not for a retro review. It is time for the long awaited objective retrospective of the Cult Classic, The Last Dragon or as I call it, The Tragedy of Sho’nuff. 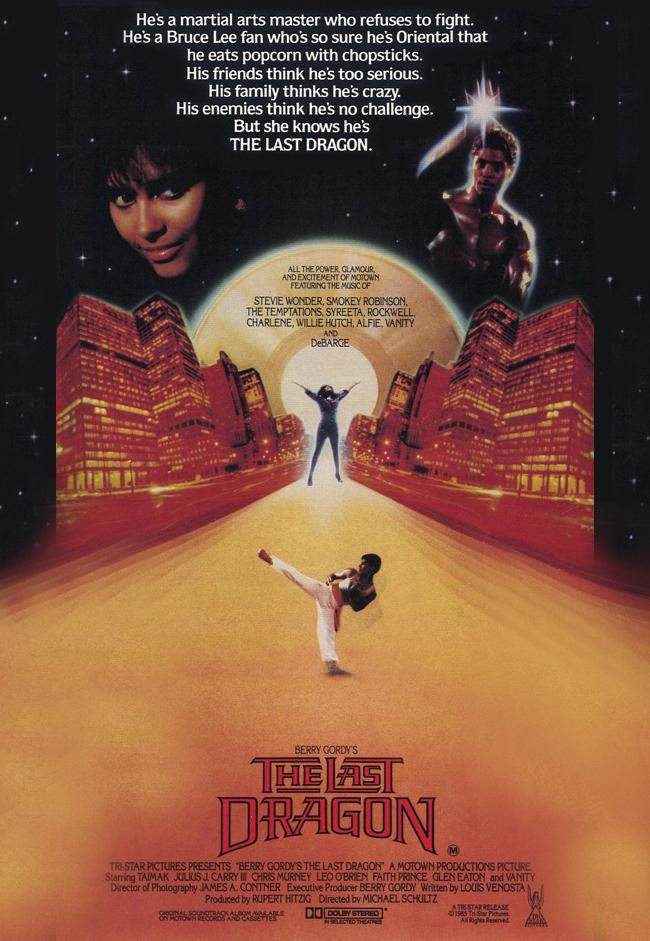 or “The Tragedy of Sho’Nuff”

Yes it is time. Not for a retro review. It is time for the long awaited objective retrospective of the Cult Classic, The Last Dragon or as I call it, The Tragedy of Sho’nuff.

The film received a mixed response from critics. Film historian Leonard Maltin gave the movie 2 (out of a possible 4) stars, calling it “…Juvenile, campy and heavy-handed…Strictly kid-stuff, except for one gag: the name of the Chinatown warehouse.”

In 2002, a paper in the Journal of Asian American Studies applauded the strong character development of the black hero, who reverses the stereotype of the typical Asian in an action film. The hero, while learning from an Asian Zen Master, learns to use his internal strength and aura to overcome obstacles. And I say “Wrong – wrong – wrong – wrong”. Why? Bruce Leroy is actually the villain of the film. Yes, the bad guy wins and gets the girl.

Now – I am not trying to troll any of you. This is my objective take on the film. This is not click bait. I’ve seen this movie hundreds of times and can quote every line in the story. I love it. Unfortunately to hasten the read, I will have to only dissect the character of Bruce Leroy.

Last Dragon is the story of a young man in Harlem, during the “bad days”, living in a tenement with his parents and two siblings. His father is a hard working business owner, running a NY style pizzeria with his wife. His little brother is a young scrappy teenager who enjoys hanging out with his friends and attending the set of a dance party type music video show hosted by the singer/VJ Laura Charles.

Bruce Leroy is usually described as a young man; a reluctant hero type; naïve and innocent. Things that are a complete contradiction to what the character does in the film. Bruce Leroy is at its source the cause of much of the misery that happens in the movie. He is part con-man, coward and suffers from a case of fanboy bordering on self-delusion. He doesn’t shatter Asian stereotypes; he is an Asian stereotype. He is so wrapped up in his put on persona that it prevents any connection to anyone throughout the film.

The film starts with Leroy’s “master” trying to murder him with a bow and arrow. We don’t know how they met or if they even have a good relationship. All we know is that Leroy has been going to this man’s boathouse to train in the martial arts for quite some time. After dodging all the arrows except for one, Leroy is instructed by his master that he has reached the final level and can no longer continue to be his student. Leroy falls to his knees and begs for forgiveness; the same way the actors in Kung Fu movies do. The old master begins laughing. Why, because he can’t believe this kid. The master instructs Leroy that he must leave now that he’s reached the final level. Leroy is still dumbfounded that he can’t train at the boathouse. The master insists, “I am no longer your Master!”, then brilliantly devises a plan to be rid of Leroy for good by giving him a fancy gold medallion that belonged to Bruce Lee and it will lead him to his new master that will teach him “The Glow”. “Go. Go. Go. Go”, says the Master.

Begin montage of Leroy walking around New York City dressed as a rice farmer. Then we are taken to a movie theater screening Enter the Dragon. The theater is filled with a rogue’s gallery of Manhattan’s riff raff and dregs. Leroy is even here watching the movie and eating popcorn… with chopsticks, smh. Lights flicker and the movie stops. Enter Sho’nuff and his unnamed gang of cronies.

Sho’nuff is a local martial arts master who is “back on the scene” to remind everyone he is the top of the Kung Fu food chain. Where has he been? My theory is that the Shogun has been in jail for an unknown amount of time. While serving his bid, he must’ve heard these fantastical stories about this new Kung Fu fighter in Harlem; a real master; he even catches bullets with his teeth. Sho’nuff now being a free man and reunited with his gang is on a mission to debunk this Bruce Leroy once and for all. Sho’nuff is actually the protagonist.

This doesn’t seem heroic on the surface. But, let’s look at Leroy. He isn’t a master and doesn’t consider himself a master. However, whenever he is around people who are ignorant to the martial arts Leroy acts enlightened, holier than thou, speaks in riddles and even has the audacity to run his own school. Yes, the student is running a Kung Fu school. He is charging kids money to teach them martial arts that he doesn’t even consider himself an authority on. His oldest student can’t even fight. He is so wrapped up in this image of being a Shaw Brothers hero that he is completely detached from reality, except when it comes to ego and making a profit.

Sho’Nuff spends the rest of the movie openly challenging Leroy to fight him. Not to the death. Not to maim. He just wants to fight. But, Leroy takes every opportunity to evade and dodge him. This continues to enrage Sho’nuff, who is forced to come up with more and more ways to instigate a fight. He challenges him at the theater – Leroy sneaks out the side door. He shows up to his dojo, insults, humiliates and threatens one of his students – Leroy kisses his Converse after damn near almost fighting one of the Shoguns girls but, not Sho. Sho’nuff even went as far as vandalize Daddy Green’s pizza and dumped his brother into a garbage can of marinara sauce.

What does Leroy do? He see’s the Shogun’s van across the street and waits for them to drive off before running into his dad’s establishment. The situation when he entered was awkward to say the least. He is then exposed for his cowardice by an angry Richie. But does he go looking for retribution? No – Leroy goes to his dojo to cry into a punch a bag that “Don’t hit back”.

Leroy refuses to fight Sho’nuff out of some sense of discipline. However, Leroy has no problem fighting the hired henchmen Eddie Arcadian.

In the aftermath of the pizzeria incident, Leroy is approached by Ms. Charles (the VJ that he has saved numerous times) to be her bodyguard. He refuses, in spite of the fact that he only knows her from saving her. As if, “Whatever. I got my medallion back. I’m on a quest. Bye Felicia”, is what he was thinking.

Laura is attracted to him but, like Sho’nuff she can’t get a reaction out of him. He’s too locked into his fantasy. She even goes on to play by his game. She creates a music video collage of Bruce Lee gifs synchronized to Willie Hutch’s “Glow” just for him in private, in the dark. It works. He comes out of his idiocy while watching a kissing scene from the music video and kisses Laura deeply. But, it’s all ruined when he sees another scene and is drawn back into his fantasy. “Thanks a lot, Bruce”.

Another example of the main characters selfishness is his form of disguise. He needs to infiltrate the SUM DUM GOY warehouse and get passed the workers who turned him away earlier in the film. Obviously, they are not on his level. So, he disguises himself by what? He steals his little brother’s clothes and steals a pizza pie from the Daddy Green’s pizza that was just vandalized. He brings a pizza topped with beansprouts. Why beansprouts? Well, because Leroy is an idiot.

His plan fails. In his confusion he runs back to his Master’s boat house and finds him packing his possessions. His master starts to laugh, “So you didn’t find the master”. He hands Leroy an empty fortune cookie and tells him everything he needs is inside. Leroy practically broke his own fingers opening the damn thing. Nothing was inside. Leroy looks stupid.

The master then giggles and pocks him in the middle of his head, like look here. He then reveals that the gold medallion is really just a belt buckle. Maybe his plan was to slip out of town before Dumb ass found out it was a wild goose chase.

“Are you going on a journey of Knowledge” says Leroy.

“No. I’m seeing my mother in Miami”, says the old master.

The climax of the film is a gauntlet battle to save Laura and his brother with an expected rescue by the Kung Fu school. The school of youngsters beats up a group of murderers, criminals, sociopaths and a white MR.T on Eddie Arcadian’s payroll. Go figure.

Finally, Leroy is almost murdered by an enraged Sho’nuff who easily dismantles him and only wants one thing – recognition. Leroy can’t answer because he’s Leroy. Sho’nuff loses grip on sanity and is about to punch a hole through his head until Leroy’s life flashes before his eyes as he is drowning in water and he finds his identity. The Glow is manifested and his invincible fists defeat Eddie and Sho’nuff… Even catches bullets with his teeth.

Flash forward to 7th Heaven during the White Party. Laura is looking unloved when Leroy shows up looking dapper with flowers. Could this be Leroy’s after-life after the Shogun killed him? No, it’s real. The movie ends and it’s a happy ending.

Although this film isn’t the greatest thing since silk pajamas… it’s a good time and harmless fun.

I’d love for everyone to take the time to watch this Cult Classic film from the 80’s and look at it from my angle. It’ll make you appreciate it more and you’ll enjoy it more doing so. Have fun with it and take the piss out of life.

So meditate, focus, breath, practice and seek peace in your shelter. This is the Last Dragon retrospective and you have the glow. Keep kicking, punching and blocking and axe kick that rewind button.