SAGITTARIUS V RELEASES HIS FIRST EP! – A MUST LISTEN!

The shadowy figure in the background is a good representation of the surprises lurking in the actual music. 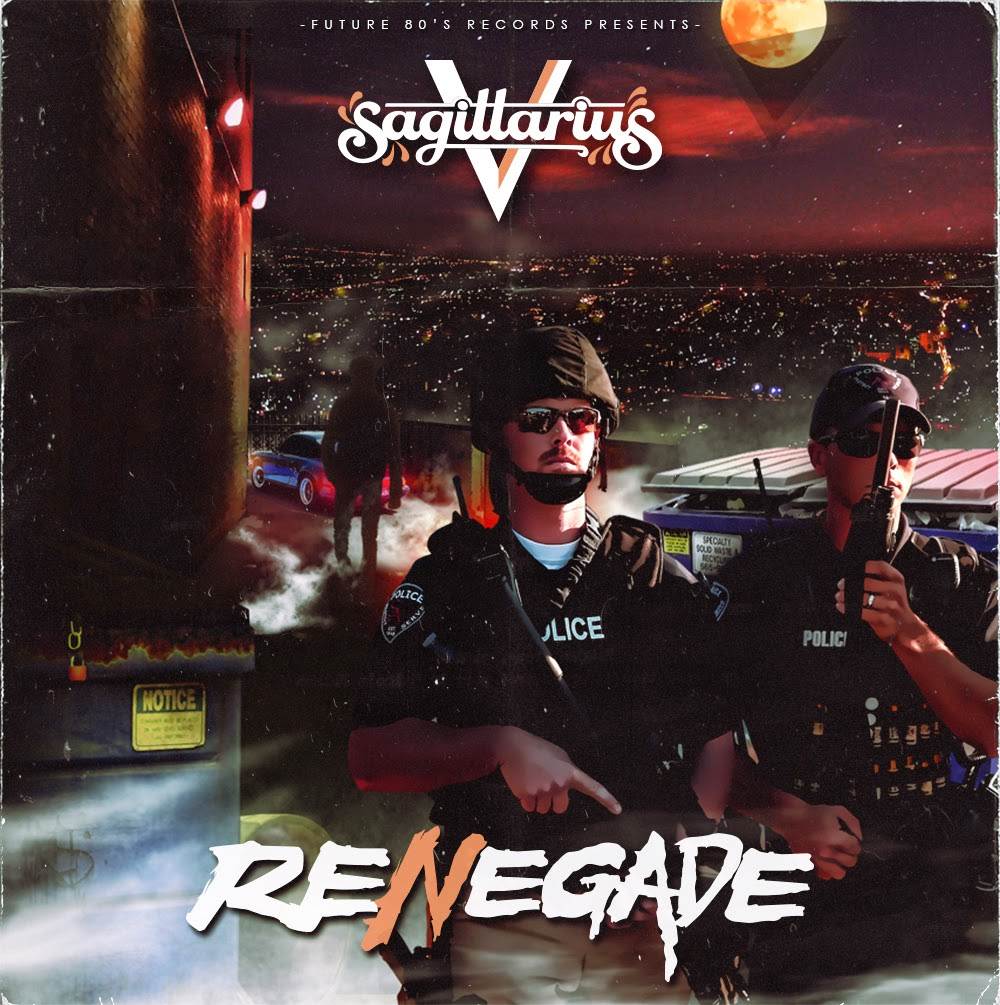 It’s an under-appreciated art to be able to make an album’s cover embody the musical content. I am reviewing Sagittarius V’s music, but the subtleties of the artwork on the new Renegade EP give you a good idea of what to expect. The shadowy figure in the background is a good representation of the surprises lurking in the actual music.

The album opens with a rather simple moog-ish rhythm that is quickly pulsing to vintage beats. Sometimes this sort of pulsating beat/synth combo can be overbearing, but on “Lucidator” it succeeds in creating atmosphere. This EP in general and this track specifically creates a defined atmosphere, one that would prove effective in a film or game score. The melody is catchy, but it is not simple. Parts of it sound as though they were originally written on a guitar or composed by someone who listens to a lot of technical metal. The hi-hat in the quieter section of the song ricochets off of the glassy synth in a really unique and original way. It is a strange and exciting listen that had me replaying the track several times.

The title track is the highpoint and the inclusion of vocals created something special (is that two reviews in a row now where the best track is titled “Renegade”?). The decision to not make the vocals excessively breathy and laden with reverb was a wise one, as the distortion added a borderline dystopian feeling. The song creates very interesting juxtaposition between lighthearted bounciness and a moody urgency.

“The Night” and “Sunrise”, the middle two tracks of the EP, are obvious companion pieces. Of the two, “The Night” is more memorable, with a twinkling synth that feels like a cold night wind in a city. The latter song has a guitar solo that absolutely cuts through the mix. It’s unfortunate that a song with such interesting sections, mainly the solo and the smooth use of guitar on the verse, also winds up being a little underwhelming. It’s definitely an idea that I’d be excited to hear Sagittarius V pursue further in the future.

A song that comes close to the emotion of “Renegade” follows. It has a bit of a rocky start and I was worried the release would prove to be top heavy, but some of the prettiest melodies of the whole batch of songs start finding their way to the front. The song becomes frantic and starts playing around with accelerating and decelerating tempos. It’s definitely the darkest track. The EP ends with a slower song that manages to match every other song on the album in terms of sheer energy. Sound-bites in songs can come across as cringe worthy at times, but “Standby… Me” sidesteps this with a catchy synth line, surprisingly complex drum pattern, and soaring guitar. I won’t lie, my initial listen had me placing this song as one of the worst on the EP. Subsequent listens really let this song shine. Since this album runs the gamut in terms of emotion, Sagittarius choosing to end the album on a smooth crescendo of hope left me smiling and eager to listen again.

Does this album break new ground as far as the genre is concerned? No. It doesn’t have the most unique synth tones in the world, but the flair and invention is in most of the compositions themselves. This solid collection of songs is not just an enjoyable listen, but an enjoyable re-listen.